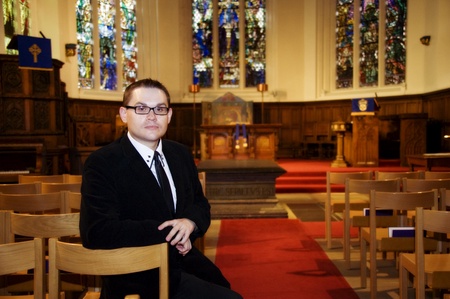 Military wives will join in voice on Saturday (November 12) to perform a piece written by an Aberdeen composer in front of Her Majesty The Queen at the Royal Albert Hall as part of The Royal British Legion Festival of Remembrance.

The University of Aberdeen’s Professor Paul Mealor has penned the music to go alongside words written by the Military wives, whose partners are servicemen currently on tour of Afghanistan.

The performance is the culmination of eight months of rehearsals with choirmaster and TV presenter Gareth Malone and their progress from novices to a harmonious group is charted in series four of the BBC2 programme The Choir – currently showing on Monday nights at 9pm.

Professor Mealor became involved with the project after writing a piece, Ubi caritas, for the Royal wedding in April.

He said: “I was invited to attend the Classic Brit Awards and Gareth Malone came up to me to say how much he had enjoyed my piece for the marriage of TRH The Duke and Duchess of Cambridge.

“He asked if I’d written anything for women’s voices. I had to tell him that I’d never written anything solely for female voices but I was intrigued by the project – it sounded such a wonderful idea to bring military wives together in this way – so I offered to compose something new.”

Professor Mealor said he was then presented with a double challenge – to write music for a choir without bass and to come up with words which would capture the feelings of the women from the tri-service RMB Chivenor in North Devon, whose husbands had just embarked on a tour of Afghanistan.

“I was concerned that I wouldn’t be able to convey the depth of their emotions through a normal poem or lyrics, so Gareth suggested asking the members of the choir to come up with the words themselves.

“They then sent me letters and poems they had written to their partners while they were away. They were very personal and deeply moving and so I created a poem using a collection of their own words.”

Professor Mealor said it was an honour to be given access to the private thoughts of the choir members and that it added real emotional depth to the work. The result is a delicate and moving piece of music entitled ‘Wherever You Are’

“I’m so grateful that they shared their letters with me, as there is no way I could have come up with the poem myself. It has so much more meaning as a result and you cannot fail to be moved by lines such as ‘’Wherever you are, my heart will keep you safe, My love will build a bridge of light across both time and space.’’

“I also added a line from St John’s Gospel which is used by the Royal British Legion: ‘Greater love has no man than this, that a man lay down his life for his friends.’ These were Jesus’ last words to his disciples on the true nature of love.

“Having the choir members involved in writing also made it truly a community piece and the first time they rehearsed it there were a lot of tears.”

The Choir began on BBC2 on Monday (November 7) and Professor Mealor will feature in episode three of the series to be screened on November 21.

Wherever You Areis one of the pieces the choir will perform in front of the Queen and The Royal Family at the Royal British Legion Festival of Remembrance in the Royal Albert Hall on Saturday, broadcast live on BBC 1, 9pm.

Paul Mealor’s album A Tender Light, including the Ubi Caritas from the Royal Wedding, will be released on Monday (November 14) on Decca.

Professor Mealor will travel to London for the concert. He added:  “I am honoured to be involved in such a prestigious event and hear music sung so beautifully and with such heart.”