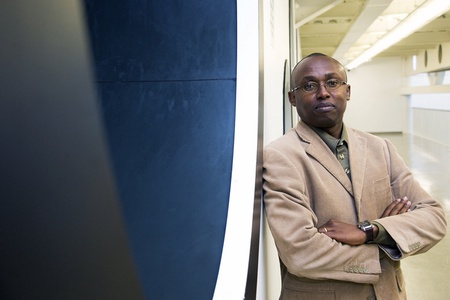 The Chef de Mission of the National Olympic Committee of Cameroon arrived in Aberdeen this week for talks to bring the country’s athletes to the city for their Pre-Games Training Camp prior to competing in the London 2012 Games.

The two facilities, which are both included in London 2012’s official Pre-Games Training Camp Guide, have lodged a joint bid to host up to 60 athletes and staff, across up to eight sports, between the July 2 and 16 next year. The joint bid has been facilitated by SportScotland – the nation’s lead agency for the development of sport -and it is hoped that Mr Ojong’s visit will allow all parties to reach an agreement to host the Camp.

So far, ASV and RGU: SPORT’s bid to host the Cameroon team seems to have overcome stiff competition from facilities in the Central Belt of Scotland and throughout England, and if selected as the host venues, would be a huge boost for the north-east.

David Beattie, Chief Executive of Aberdeen Sports Village said “We are delighted with the progress we’ve made so far in our pursuit to host the Cameroon team prior to London 2012. We are keen to reach a formal agreement to host the Camp in the next couple of days and if successful, it will provide a great opportunity for us to showcase the city to our visitors and to promote sport and an involvement in the Games to the community”.

Filippo Antoniazzi, Director of Sport at Robert Gordon University added “It is testament to the world-class facilities we have on offer in Aberdeen that we’ve been considered for such a prestigious event. The prospect of hosting Olympic athletes has the potential to inspire current and potential sporting talent, and the North East is an ideal location to enable Cameroon’s stars to adapt to the cooler climate”.

Mr Ojong was thrilled to be visiting the Granite City and said “It is an exciting time for all parties involved. I am very impressed with the standard of facilities available at the venues and optimistic that we can solidify an agreement during my stay”.