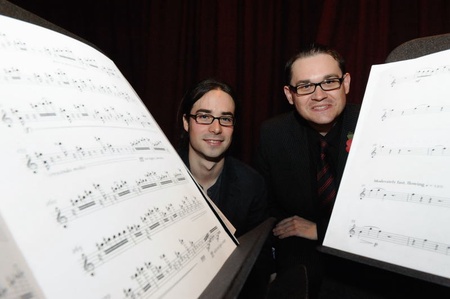 The 2011 winner of a prestigious music prize which attracts up-and-coming- composers from across the world has been announced.

The Aberdeen Music Prize, a biennial competition organised by the University of Aberdeen and the BBC Scottish Symphony Orchestra (BBC SSO), was awarded to Spanish composer Marc Garcia Vitoria.

The 25-year-old from Valencia took the Prize, which includes £5000 in the form of a commission to write a new piece for the BBC SSO which will subsequently be broadcast on BBC Radio 3, with his work Plastic Trio.

He overcame four other finalists to take the title - Shai Cohen from Israel, Zvonimir Nagy from the USA, Christophe Looten from France, and Azusa Yomogida from Japan.

The unveiling of the winning composition followed a successful weekend of performances and workshops, which ended with a Gala Concert at the Cowdray hall on Sunday evening.

The weekend also included the screening of work by young composers from Aberdeen city and shire who took part in a workshop to create their own musical scores. These were premiered at the Belmont Picturehouse on Sunday.

The Aberdeen Music Prize is the brainchild of the University’s Professor Paul Mealor, who shot to fame when his own work was played at the Royal wedding in April. As part of celebrations for the Prize he shared his piece, Ubi caritas with an Aberdeen audience at King’s College Chapel, where he also preached Sunday’s sermon.

Professor Mealor said: “The 2011 Aberdeen Music Prize attracted a very high standard of entrants and we are delighted to be able to offer such a wonderful opportunity to up-and-coming composers.

“Marc’s work, Plastic Trio, was a worthy winner. It is a piece of music that is both fluid and beautifully written and seemed to capture the idea of the competition well.

“All of the finalists produced unique and interesting work but Plastic Trio cried out a skill in writing for instruments that took it to a different level.”