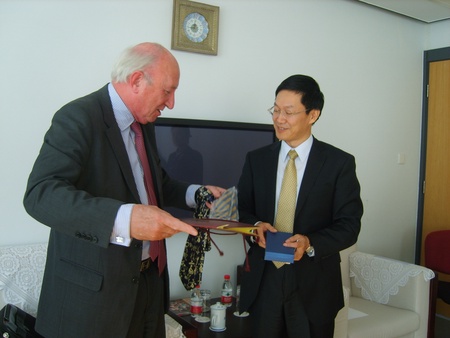 A team from the University of Aberdeen have held a week-long series of meetings with top Chinese Universities and industries.

The aim of the trip is for much increased collaboration with Chinese Institutions focusing on areas where there is excellence on both sides.

Their first port of call was Sinopec, a major Chinese energy company, to discuss the growth of training programmes delivered in the University to Sinopec staff.

The team also met with members of Wuhan University, who travelled to Beijing for the meeting. A relationship with Wuhan has existed for several years and was renewed this year for a further five years.

While in Beijing they also spent time with the Hanban, the Chinese centre for Language and Culture, discussing the wish of both Universities to host a Confucius Institute in Aberdeen.

The tour of China continued in the Shandong Province where University representatives held discussions with Provincial Education leaders on educational provision in Scotland and areas in which collaboration could take place.

At Shandong University there were presentations from both universities and a Memorandum of Understanding was signed for a Collaborative MLitt in English Linguistics for Advanced Teachers of English (ELATE).

The team then moved on to Shandong Jianzhu University where Dr Fennell was awarded Visiting Professor Status by the President of the University.

The tour will conclude at Liaocheng University where there will an agreement reached on future collaboration.