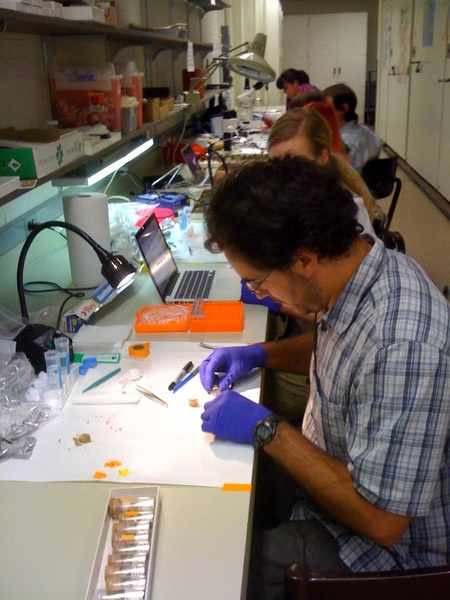 An international team of researchers, led by the Archaeology Department at Aberdeen have been carrying out research in one of the world’s premiere museums.

For the past week the team have been working in the zoological collections at the world famous Field Museum in Chicago, taking DNA samples and photographing the teeth of rats mice and shrews from around the world.

The research group comprising PhD students and postdoctoral research fellows from the universities of Aberdeen, Durham, Oxford and Cornell, have been photographing the tiny teeth and carefully removing tiny samples of dried brain tissue still present in the skulls of these small mammals as part of a research project to unravel the early prehistory of human dispersal and migration into the islands of the Indian and Pacific Oceans.

Species of rats, mice and even shrews have been deliberately or accidentally transported by humans during their early voyages and are today distributed far beyond their natural range. Since these animals are so closely linked with human settlements and activities, their genetic and morphological signatures can be tracked through space and time, to build up a detailed map of human migration and colonisation history from their origins to their final destinations.

To do this the team are using museum specimens collected in many locations around the world over the last 100 or so years, and comparing them with bones recovered from archaeological sites in the same regions

The Field Museum generously allowed the team to sample their precious materials on an unprecedented scale – over 400 specimens.

Professor Keith Dobney of the Archaeology Department at Aberdeen said: “These collections are a unique but sadly diminishing and under-used resource but they are incredibly important in our attempts to understand the natural world and the growing impact humans are having on it. We are very lucky and privileged to have been allowed access to such important material.”