Jellyfish on the increase in the Mediterranean
29 September 2011 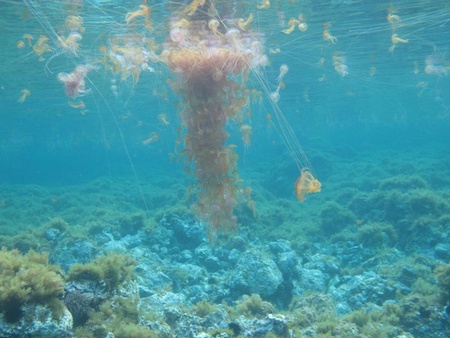 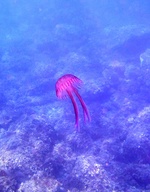 One of Europe’s favourite holiday destinations - the Mediterranean - could be facing even more jellyfish outbreaks, according to a scientist who helped set up a citizen database to monitor the problem.

Jellywatch - which encourages members of the public to deliver their jellyfish sightings via a special website or by using a phone app - was launched three years ago in Italy and Israel following public concern over increasing reports of jellyfish blooms.

Jellyfish monitoring has also been taking place in Spain and will be rolled out in other European countries via a dedicated work-package within a new EU project Vectors of Change in Oceans and Seas Marine Life, Impact on Economic Sectors, aimed at improving our understanding of how environmental and man-made factors are impacting on marine ecosystems now and how they will do so in the future.

Tomorrow (Friday, September 30) the researcher who conceived and helped launchJellywatch – the largest and longest attempt to monitor jellyfish - will tell an international marine conference taking place in Aberdeen that the Mediterranean, like the rest of the world’s oceans, is moving from an “ocean of fish” to an “ocean of jellyfish”.

Organised by the Universities of Aberdeen and St Andrews, the World Conference on Marine Biodiversity is bringing around 1,000 researchers to the city to discuss a wide range of marine issues such as fisheries management, renewables, climate change and conservation.

Ferdinando Boero, Professor of Zoology at the University of Salento in Italy, and associated to CNR-ISMAR, says a number of factors have caused the jellyfish problem, such as climate change and man-made changes to the ecosystem with the building of coastal defences.

However the professor, a jellyfish expert, believes overfishing is mainly to blame.

“On land there is no resource that we take so heavily from natural populations - everything comes from agriculture,” said Professor Boero.

“But in the sea we are still hunters and gatherers, just as we were on land, and have overfished the ocean, creating a vacuum which is being filled by jellyfish.  It’s not just happening in the Mediterranean but in seas all over the world.”

Jellywatchwas launched in a bid to monitor jellyfish numbers, initially off the Italian coast.

Professor Boero said: “Monitoring jellyfish is not easy – you can’t see them from satellite, sampling is cumbersome and costly, and previously projects were not receiving funding. The Italian coastline is 8,500 km long and to monitor such a stretch of coastline is impossible with normal tools.

“That is why we launched Jellywatch together with CIESM – the Mediterranean Science Commission – which encourages the public to get involved and record their jellyfish sightings.”

A poster featuring various species of jellyfish was produced to help guide the public who are also asked to take a picture and record other information such as the location and abundance of the jellyfish.

The monitoring is helping scientists build a picture of the patterns and distributions of jellyfish which is key to tackling the problem.

Professor Boero said: “The amount of information we are gathering is massive and is showing us the different distribution patterns of the various jellyfish species. Now the challenge is to understand the processes behind it.”

Some of the findings include:

Professor Boero added: “While jellyfish are a natural feature of the Mediterranean, ‘jelly blooms’ were rarely seen until the last few years, when massive swarms became a frequent sight in coastal waters.

“This causes all sorts of problems and one of the biggest is obviously tourism – mayors of towns have asked the scientific community about the problem but until recently there has not been any research into the problem because it hasn’t been funded. Now we have Vectors of change and the EU has invested in jellyfish research.

“Jellyfish cause problems for swimmers, particularly as some species are a real health hazard - an Italian woman was killed last year after being stung by a Portuguese Man o’ War.

“They also cause problems for fishermen as they clog nets, keep away fish and consume fish larvae.

“Jellyfish have also clogged industrial marine cooling systems in Israel and they have also caused problems for power plants in the US and Scotland.

“There are positives that have come from it such as an increase in the fish species that feed on jellyfish and a greater awareness of jellies from the public.

“I would also like to see cooks use jellyfish as a food source – they are a delicacy in China and Japan.

“However if we don’t do anything about the situation all the indications from Jellywatch suggest that the Mediterranean is moving towards a gelatinous future, just like the rest of the seas of the world.”

Stills and moving images of jellyfish are also available.