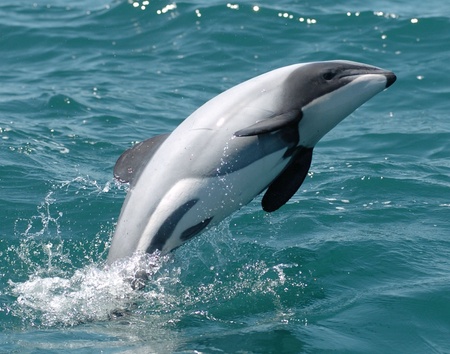 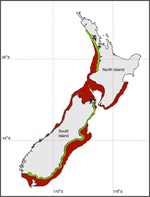 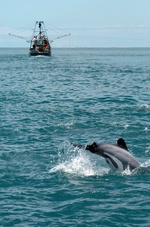 An international marine conference will tomorrow (September 29) hear that measures to protect the world’s most endangered marine dolphins against fisheries bycatch are inadequate to prevent their extinction.

Hector’s dolphins are only found around New Zealand, researchers from all over the world attending the World Conference on Marine Biodiversity in Aberdeen will hear.

A conservationist will tell delegates that since nylon fishing nets came into use in the 1970s, entanglements in gill and trawl nets have decimated the once 30,000 strong species to about a quarter

The country’s North Island population, a separate subspecies known as Maui’s dolphins, is down to less than 100 individuals, according to Dr Barbara Maas, Head of Endangered Species Conservation with NABU International – Foundation for Nature, one of Germany’s oldest and largest environmental associations.

With no more than 25 adult females left, Maui’s dolphins are perilously close to extinction, Dr Maas will tell the conference, which has been organised by the Universities of Aberdeen and St Andrews.

Dr Liz Slooten from Otago University and Dr Nick Davies from the Oceanic Fisheries Programme in New Caledonia examined data on commercial gillnetting on the east coast of New Zealand’s South Island, the only part of the country for which bycatch levels in this fishery were established by government observers.

“Our research shows that each year 23 Hector’s dolphins drown in commercial gillnets off the east coast of the South Island,” says Dr Slooten. “The sustainable limit for this area is about one dolphin a year. This level of bycatch will deplete the population by least a further 14% by 2050.”

But Dr Maas – who has been on the forefront of efforts to protect the species for more than a decade, including as part of New Zealand’s Department of Conservation, claims this is only part of the problem.

“Other fishing methods that are known to kill Hector’s dolphins, such as trawling and recreational gillnetting, are not included in these calculations,” said Dr Maas.

“Hazards such as pollution, boat strikes, and marine mining are also treated as if they have no effect on dolphin survival or reproduction.

“Trawl nets are likely to claim as many endangered Hector’s dolphins as commercial gillnets. This brings the number of deaths caused by commercial fishing along the east coast of the South Island to 46.

“An annual loss of this size will wipe out 62% of the population by 2050. Only a scattering of animals will survive, potentially pushing the population beyond the point of no return.”

Dr Maas added: “Recreational gill nets pose another threat to this beleaguered species. New Zealand is said to have the highest per capita boat ownership in the world, and fishing, including with gillnets, is a national pastime.

“Inspecting tens of thousands of gillnets, each measuring up to 60 metres, is impossible. Therefore no one knows how many dolphins end up trapped in them.

“Even if commercial gillnetting is considered in isolation, the odds are stacked against Hector’s dolphins. The likelihood that they won’t recover to even half their original numbers within five decades is a massive 80-92%. Yet without fishing, numbers could double to 15,000.”

Dr Maas warns that under current management Hector’s dolphins will continue to slide towards extinction.

“Absolute protection against commercial and recreational gill-netting and trawling is the only way to prevent their demise,” she said.

“Scientists and conservationists have been calling for a New Zealand-wide ban on gill and trawl nets in waters up to 100m depth for more than two decades. This could easily be achieved by switching to more selective fishing methods that don’t catch dolphins, such as hook and line fishing and fish traps.

“Last year alone, government observers witnessed three entangled dolphins in two areas that despite strong warnings from scientists and conservationists, were left unprotected due to industry lobbying. They represent the tip of the iceberg and the areas remain unprotected to this day.

“Despite overwhelming evidence that Hector’s dolphins are being killed faster than they can breed. , the New Zealand government continues to bow to industry pressure and recently cut back protection measures by reopening sensitive areas to commercial gill netting. New Zealand must act now, before it is too late.”

·         Hector’s dolphins are classified as Endangered by the Red List of Endangered Species. This means that they are “facing a high risk of extinction in the near future”.

·         Females only have one calf every 2-4 years and do not reach breeding age until they are 7-9 years old. Their potential for recovery is therefore extremely slow.

·         North Island Hector’s dolphins, also called Maui’s dolphins, are classified as Critically Endangered by the IUCN Red List of Endangered Species. This means that they are “facing an extremely high risk of extinction in the immediate future”.

·         Recent, as yet unpublished government figures indicate that Muai’s dolphin numbers have dropped well below 100 individuals.