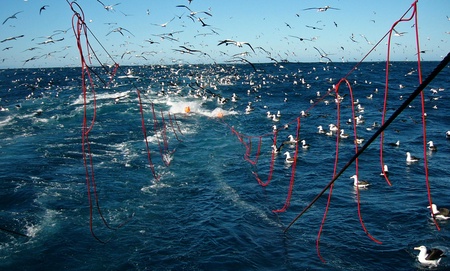 Research being presented at the World Conference on Marine Biodiversity in Aberdeen tomorrow (27 September 2011) will report a global estimate of the impact of longline fisheries on seabirds and reveals that, despite efforts to reduce seabird deaths, upwards of 300,000 birds are still being killed every year.

The study, recently published in the journal Endangered Species Research, was carried out by scientists from the RSPB and BirdLife International and is a powerful reminder of how far we still need to go to ensure ecologically responsible fishing.

Since the 1980s, scientists have linked global declines of albatrosses and other seabirds with ‘incidental catch’ in longline fisheries. Adult and juvenile birds become snared on hooks attached to the lines, which can be over a hundred kilometres long, and are dragged underwater to a premature death.

Presenting the research is Dr Orea Anderson, policy officer for the Global Seabird Programme and lead author of this study: “It is little wonder that so many of the affected seabird species are threatened with extinction - their slow rate of reproduction is simply incapable of compensating for losses on the scale this study has demonstrated.”

A major factor determining this huge estimate is the emergence of fleets, with previously unaccounted for bycatch problems, adding to the global tally. While some fisheries have reduced their impacts on seabirds, we are only just becoming aware of problems in others - hampered by a lack of data.

The Spanish longline fleet on the Gran Sol grounds off SW Ireland is one such fleet, with preliminary data suggesting it may be responsible for killing large numbers of seabirds, potentially upwards of 50,000 annually, mostly shearwaters and fulmars. The Japanese tuna fleet came second in scale – over 20,000 killed each year, but with the largest impact on albatrosses.

Despite an exhaustive review, substantial data gaps remain (e.g. Nordic[1], Asian distant water, and Mediterranean fleets) and until these are filled it is impossible to gauge the true impact of global longline activities on seabirds. However, the continued declining trends in many seabirds remain a cause for grave concern. Seventeen out of 22 albatross species are threatened with extinction[2] with the main threat coming from mortality in fisheries.

Some fisheries have enforced strict regulations, resulting in substantial bycatch reductions in recent years. Seabird deaths around South Georgia in the CCAMLR[3] zone of the Southern Ocean have declined by 99% since regulations were enforced. South Africa achieved a drop of 85% bycatch in its foreign-licensed fleet in 2008, when a cap was placed on the number of seabird deaths permitted. More recently, in April 2011, Brazil passed a law requiring the use of stringent seabird bycatch measures in their domestic tuna longline fleets.

But the problem is so global in scale that every fishing nation has a role to play in alleviating this needless waste of marine life.

RSPB and BirdLife International’s Global Seabird Programme call on regional fisheries management organisations and industry to protect seabirds through the use of simple, cost-effective mitigation measures that have been proven to reduce the threat of bycatch.  They are also working to be part of the solution: the Albatross Task Force, founded by the RSPB and BirdLife International, works directly with fishermen and fishery managers in seven countries (bycatch hotspots) worldwide to reduce the number of seabirds being killed.

Dr. Cleo Small, senior policy officer for the Global Seabird Programme and co-author of the review, commented: “Using simple bird-scaring lines and weighting of hooks as they enter the water could dramatically reduce the number of seabirds being killed”.

“With the UK’s Overseas Territories in the South Atlantic holding a third of the world’s breeding albatrosses, the UK has a major responsibility to ensure seabird-friendly fisheries. As for the EU, the findings of this review places a heavy onus on the forthcoming EU Plan of Action for Seabirds to deliver a robust set of remedial measures capable of reducing the impact of longline and other fisheries on seabird populations in EU waters and beyond.”

[3] Commission for the Conservation of Antarctic Marine Living Resources

Full journal article can be found at:

Save the Albatross campaign webpage: http://www.rspb.org.uk/supporting/campaigns/albatross/

·   Bycatch in longline fisheries is believed to be responsible for undermining the conservation status of many seabird species, but no comprehensive global assessment has been undertaken until now. We review the extent of seabird bycatch in all longline fisheries for which data are available. Despite the many inadequacies and assumptions, we estimate that at least 160,000 (and potentially in excess of 320,000) seabirds are killed annually. Most frequently caught are albatrosses, petrels and shearwaters, with current levels of mortality liable to be unsustainable for some species and populations.

·   Where realistic comparisons can be made, with data from the 1990s, there is evidence of substantially reduced bycatch in some key fisheries. Reductions stem from decreased fishing effort (especially in Illegal, Unreported and Unregulated (IUU) fishing in the Southern Ocean), and greater and more effective use of technical mitigation measures, notably in ‘demersal’ fisheries, i.e. longline fisheries which target bottom-dwelling fish such as cod, hake and Patagonian toothfish.

·   However, bycatch problems in other fisheries have also emerged. Current concerns include those with previously unidentified bycatch problems (e.g. Spanish Gran Sol demersal fleet) and those where bycatch was identified, but where persistent data gaps prevented adequate assessments of the scale of the impact (e.g. Nordic demersal fisheries).

·   In 2006-2007, 3 surveys (2 week trips) over the seasonal spread of the Spanish Gran Sol demersal fleet were conducted by SEO/BirdLife. The fishery operates for roughly 165 days of the year, targeting mainly hake and black bream. The fleet is comprised of 35 longline vessels, with roughly 16 vessels operating at any one time. A bycatch rate of 1.008 birds/1,000 hooks was estimated with a total estimated mortality of 56,000 birds per year. Total fishing effort for the fleet was extrapolated to be ~5.5 million hooks per year, based on 238,025 hooks observed (approximately 0.4% of the fishery) (BirdLife Intl 2011).

·   Future assessments will only achieve greater precision when minimum standards of data collection, reporting and analysis are implemented by longline fishing fleets and the relevant regional fishery management organizations. Those fisheries in which bycatch has been substantially reduced demonstrate that the problem of seabird bycatch could be reduced to negligible proportions by enforced implementation of appropriate best-practice mitigation devices and techniques.

·    In Brazil, a new law to enforce the use of mitigation measures on longline vessels fishing southern of 20oS was passed on 19th April 2011. From now on the vessels are obligated to use light torilines (also known as  bird scaring lines), in all fishing operations and use at least 60g of weight on secondary lines located not further than two meters from the hook. The new rules also mean skippers will have to report all seabirds bycatch and maintain an observer on board when requested.

·   The Albatross Task Force (ATF) was established by BirdLife International and the Royal Society for the Protection of Birds (RSPB) as a collaborative initiative to bridge the gap between conservationists and the fishing industry. The ATF provides skilled mitigation instructors to work with fishermen and fisheries managers both on-shore and at sea.The ATF works in South Africa, Namibia, Brazil, Uruguay, Chile, Argentina and Ecuador, all global hot spots for seabird bycatch.