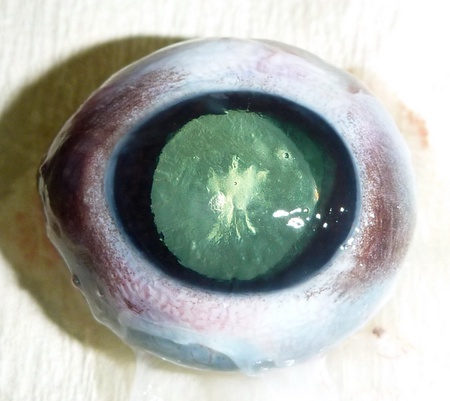 It’s Earth’s largest habitat and is the least explored frontier on our planet today – the deep sea has much that scientists have yet to uncover.

One of its distinctions is how dark it is – often no natural light penetrates beyond the first few hundred metres.

Such characteristics may lead some to assume that creatures of the deep have no variation in their sensory systems, particularly their visual systems.

But new research is now showing that sharks living at these murky depths have evolved eyes that give each species a specific edge in this continual war of fish-eat-fish.

Their findings are helping to build a picture of the behaviour and different habitats of deep sea sharks.

Researchers will discuss their findings tomorrow (Tuesday, September 27) at the World Conference on Marine Biodiversity organised by the Universities of Aberdeen and St Andrews which is taking place in Aberdeen.

Amy Newman, from the University of Western Australia, is studying the eye and visual centre of the brain of seven species of deep sea shark caught off the north western New Zealand coast as by-catch by fishing boats trawling at depths of between 750m and 1100m.

The PhD student looked at light detecting cells called photoreceptors found in the retina of species which included the New Zealand Lanternshark; the Rough Longnose Dogfish; the Prickly Dogfish; the Flatnose Catshark, McMillan’s Catshark and the Beige Catshark. The last two species are particularly rare.

Ms Newman said: “The deep sea is the largest unexplored frontier on our planet today, and its inaccessibility has resulted in a lack of knowledge and understanding about the organisms that occupy it.

“The environmental conditions an animal is exposed to are reflected in the animal itself, so by investigating eye structure we can find out more about how deep sea animals use the available light for survival and to predate.

“We studied the eyes from seven species of deep-sea shark and all species showed specialisations within the retina, attributable to the depth inhabited and their foraging and predator avoidance behaviours.

“The Beige Catshark, which is known only from one specimen previous to this study, was found along with McMillan’s Catshark to have a small area of increased density of light detecting cells in an area of the retina that would give these species the ability to detect any animals approaching them from behind.

“These catsharks are fairly small with McMillan’s Catshark only reaching around 50 cm total length as an adult suggesting that they may be susceptible to predation from other larger sharks.

“All species in this study examined to date, show different arrangements and densities of these photoreceptors – or light detecting cells - within the retina.

“One commonality seen between species is that most show some increase in cell density in the temporal region of the retina which means these species have an increased sampling of the visual field in front of the shark.

“This most likely aids in the detection of bioluminescent prey as the shark swims along in the water.

“The main point the data collected so far shows is that these deep-sea sharks have different adaptations to allow them to detect predators and prey which is of course paramount to their survival.

“This is important because the way sharks function, interact and ultimately survive in their environment is reflected in the organisation and sensitivity of their sensory systems.

“Exploring these systems allows us to infer ecological information. This is particularly useful for deep‐sea species since, to date, we have limited knowledge of their biology and life histories due to the inherent difficulty of observing them in their natural habitat.”

The World Conference on Marine Biodiversity is taking place between Sept 26 and 30.