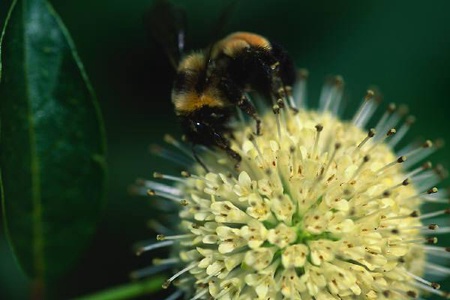 According to legend Albert Einstein once speculated that without bees man would live no more than four years.

There is debate over whether the famous scientist actually did say that, but what cannot be disputed is the decline in numbers of honey bees which is hugely significant given their role in pollinating most of the world’s crops.

Work underway at the University of Aberdeen to try to safeguard the bee will be discussed at the first in a brand new series of events taking place tonight (June 30) at Aberdeen Art Gallery at 7pm.

Taking inspiration from the 2011 Wildlife Photographer of the Year Exhibition currently on display at the Gallery, the new series will feature four illustrated presentations on four separate nights from scientists working in various projects related to the natural world at the University of Aberdeen.

Dr Alan Bowman’s talk The Problems with our Bees - which will launch the Discovery Gallery series - is fully booked.

Dr Bowman was recently included in the men’s magazine Esquire’s article, 20 men to shape the next 20 years for his work on trying to protect honey bees. The research received worldwide attention for its novel and promising approach.

Senior Lecturer in Biological Sciences, Dr Bowman said: “The honey bee has been declining by as much as 30% a year and this is a real cause for concern.

“More than 70 per cent of our crops are dependent on bees and other insect pollinators – without their help we’d be eating just potatoes, rice and grains.

“My talk will highlight some of the problems facing the insects. I’ll also be discussing the work we are doing at the University of Aberdeen, together with the National Bee Unit, to try to tackle the Varroa mite which is the biggest killer of bees worldwide.”

The University’s Public Engagement with Science Unit - the team behind the popular Café Scientifique series – has organised the Discovery Gallery series which is part funded by a science engagement grant from the Scottish Government.

The other talks – taking place on July 14, July 28 and August 11 – will cover red squirrels, fish in some of our deepest oceans and how marine specimens are helping with the development of drugs.

Dr Ken Skeldon, Head of Public Engagement, said “The Discovery Gallery will offer a relaxed, informal environment for people to see the latest exhibitions and then enjoy a presentation from a guest speaker.

“There will be time for visitors to view the exhibition, enjoy a refreshment and then ask questions of the guest speaker following their talk.

“As well as hearing about some of the University’s wildlife research, the audience will also be able to view the fantastic Wildlife Photography of the Year exhibition.”

Admission to the Discovery Series cost £4 or £3 concessions and places must be booked in advance by calling 01224 523695. Payment can be made over the phone.

Each event begins at 7pm with refreshments served in the Art Gallery and an opportunity to view the featured exhibition ahead of each talk. To find out more visit http://www.cafescienceaberdeen.co.uk/