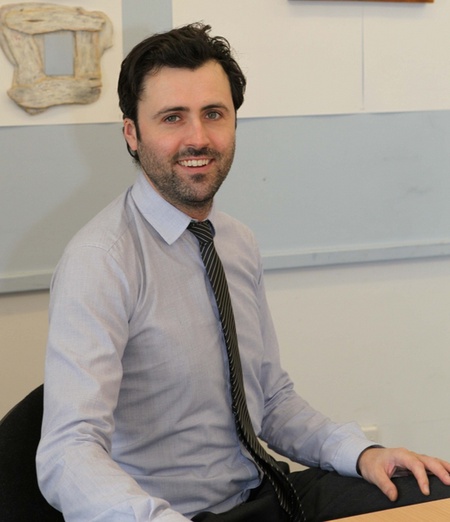 An Aberdeen graduate has been named Scotland’s best new teacher and will now compete for the Outstanding New Teacher title in a UK-wide award.

Richie McColm (31) originally from Kirkintilloch, near Glasgow, who studied at the University of Aberdeen’s School of Education, won the Probationer of the Year category at the Scottish Education Awards because of the extensive programmes he set up to improve the lives of the pupils beyond the classroom.

Richie, who teaches at Perth Grammar School, began his first year in teaching by setting up a drama club - which now has 60 pupils – and he feels this has really increased the confidence of the children who participate.

He also uses his time outside the classroom to be a mentor to pupils who he feels needs extra attention, and encourages those pupils in turn to be role models for other pupils in the school.

An important part of his efforts this year was to set up an Optimistic course to get pupils to think positively about themselves and their future aspirations.

Ritchie said he was delighted to receive the title but that the greatest award was not the prize itself, but that parents took the time out of their day to tell the competition the difference he had made to their families because of the work he had done in helping to put their children on the right path in life.

He calls these ‘moment rewards’ and said for him, this is what the experience as Scotland’s best new teacher is all about.

Richie underwent a rigorous process to win the award. Judges from the competition spent 80 minutes with pupils, staff and teachers, before observing his teaching for an hour.

He was accompanied to the ceremony, held at the Hilton Hotel in Glasgow on June 14, by some of the pupils he had helped, who during his presentation spoke of the respect they had for him and his efforts.

Richie said: “I came into teaching with a mindset of a responsibility for all individuals in the school and set up different activities to attend to the differing needs of pupils.

“The University of Aberdeen Education department taught me about the need for inclusion in schools and to make every child feel safe and secure in their environment and helped me to understand how drama can be used as an educational tool to do this.

“None of this is a task for me - I simply love everything that I am doing.”

Richie said he was able to dedicate additional time to extra-curricular activities because of the probationary timetable for new teachers.

He now plans to set up a theatre company in the school run entirely by pupils and tailored to meet the needs of the community when he starts as a new full time teacher at Perth Grammar in the autumn.

Ritchie will attend the Pearson Teaching Awards ceremony on October 30 in London which will be broadcast on BBC 2.