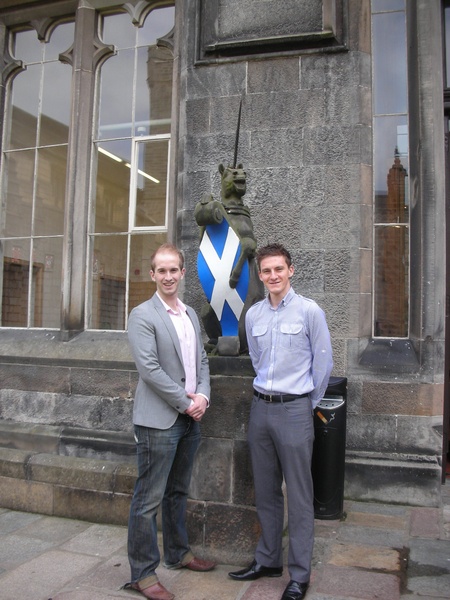 For the second year in a row the University of Aberdeen will be sending a pair of law students to the International Negotiation Competition after triumphing in the national heats.

Andrew Swift and Adam Davies, both of Aberdeen, will head to Copenhagen next week where they will pit their wits against their counterparts from over a dozen different countries.

The pair, both studying for the Diploma in Legal Practice, triumphed over other university teams in the Scottish Negotiation Final, held on March 11, to earn the right to represent Scotland.

Andrew and Adam will be competing in the week-long final against the national winners from countries as far afield as India, the USA and South Korea to battle it out for the top prize.

Adam said: “Having received excellent tuition in the art of negotiation from our coach Gavin Cooper we hope to do him and the University of Aberdeen proud at the international finals. We know it will be a wonderful experience and one which will undoubtedly enhance the written and verbal skills needed to become successful lawyers in the future.”

The negotiations involve the teams taking on a fictional challenge to resolve a series of disputes, this year themed around the aviation and investment industries.

In the limited time available, the teams must assimilate the information and deduce what is important to their ‘client’.

They must then work to achieve what is most important, and give ground on other matters until acceptable agreement is reached.

Andrew, who is due begin a traineeship at Semple Fraser in Edinburgh, added: “It is a huge honour to be representing both the University of Aberdeen and Scotland on an international stage. It is a fantastic opportunity to compete against some of the very best law students in the world and while winning the competition will be extremely difficult, we are very much looking forward to the challenge.”

Greg Gordon, a law lecturer at the University, who teaches negotiation skills and organised the Scottish competition, said: “Negotiation is a key legal skill and the late Elaine Tyre of Edinburgh University worked very hard to establish a Scottish National Competition.

“I wish Adam and Andrew all the very best of luck in the International finals.”