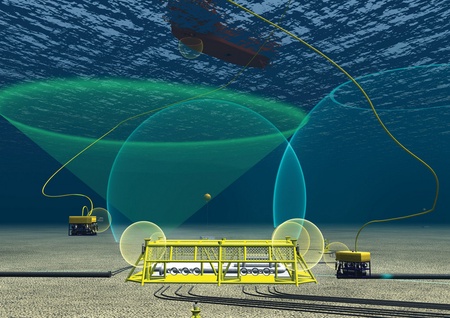 A new Knowledge Exchange Hub involving leading Scottish universities, private companies and the public sector is being established to help Scotland develop into a world leader in the development and use of sensor systems.

The University of Aberdeen is delighted to be tasked with leading the subsea strand of this major national initiative,  working with Dundee and Robert Gordon universities, the National Subsea Research Institute, its member companies and others.

Complex sensor systems are widely used in areas as diverse as telecommunications, agricultural and environmental sensing, health monitoring and in utilities on land, as well as in the underwater oil and gas sectors.

The Scottish Sensor Systems Centre (SSSC), launched this month, aims to harness the research expertise of Scotland’s leading universities with UK and international businesses and the public sector to establish Scotland as a leading global centre for research into these systems and the development of commercial products. A powerful coalition of over 20 industrial partners is joining forces with the universities in the project.

The SSSC will focus on sensor systems research and the creation of commercial applications in two domains: terrestrial (on land) and subsea.  The aim is to harness the research and development activities conducted within academia and align that knowledge with the needs of industry.

The consortium brings together a number of extremely influential industrial and academic groups. Edinburgh, Glasgow, Strathclyde, Heriot-Watt and St Andrews universities form parts of the Edinburgh Research Partnership in Engineering and Mathematics, the Glasgow Research Partnership in Engineering, and the Scottish Informatics and Computer Science Alliance, which work with a wide range of local SMEs developing and using sensor systems technologies.

At the core of the consortium Glasgow, Edinburgh, Strathclyde and Heriot-Watt universities will work closely with leading UK and international companies to produce sensor system products for terrestrial markets. Aberdeen, Dundee and Robert Gordon universities will work with the National Subsea Research Institute in Aberdeen, its member companies and others to develop products for subsea use in the oil and gas, aquaculture and affiliated sectors.

Aberdeen, Dundee and Robert Gordon universities form the Northern Research Partnership, which works with local SMEs through Subsea UK and the National Subsea Research Institute and its 22 member companies.

The SSSC will be run by a board chaired by a leading industry figure supported by a small administrative staff plus a business development manager in Glasgow and Aberdeen. The terrestrial work will be led by Professor Steve Beaumont, Vice-Principal Research and Enterprise at the University of Glasgow, assisted by colleagues at Strathclyde, Edinburgh, Heriot-Watt and St Andrews universities. Subsea work will be spearheaded by Dr Richard Neilson, of the School of Engineering at the University of Aberdeen, working with colleagues and Dundee and Robert Gordon universities.

Professor Beaumont said: “This grant from the Scottish Funding Council is helping us to build a powerful consortium to meet the needs of Scottish industry.  As a result of the strength and breadth of our academic and industrial partnership we hope to attract more funding to support our initiative in the near future”

Dr Neilson said: “The Centre will strengthen sensors development within Scotland, and help maintain an area that is of important to the economy and recognised worldwide.  The subsea aspect of the Centre also aligns well with the subsea sectors priorities identified by the National Subsea Research Institute (NSRI).”

Mark Batho, chief executive of the Scottish Funding Council, said: "We are pleased to invest in knowledge exchange projects such as this which harness the research expertise of Scotland's leading universities to help meet the needs of industry. This is a great example of collaboration between universities and several business partners which will establish Scotland as a leading global centre for research into these systems."

Between June this year and December 2012, the SSSC will identify and fund four initial projects, recruit post-doctoral research assistants, and appoint business development managers in Glasgow and Aberdeen. In the next 18 months, the subsea and terrestrial work will move towards merging into a single workstream, the first products will be developed, overseas companies will be invited to join and other sources of funding will be sought from agencies such as the European Union.

In the final year of the project in 2015, the SSSC is expected to become self-sustaining and supported by a strong network of industrial partners which can leverage additional support from the public sector, research funding organisations, and industry.

Issued by Breen Media on behalf of the Scottish Sensor Systems Centre. For further information or interviews, call Stephen Breen on 01698 810-415 or 07843 076556 or email stephen@breenmedia.co.uk

For further information of the SSSC, please visit  www.sensorsystems.org.uk