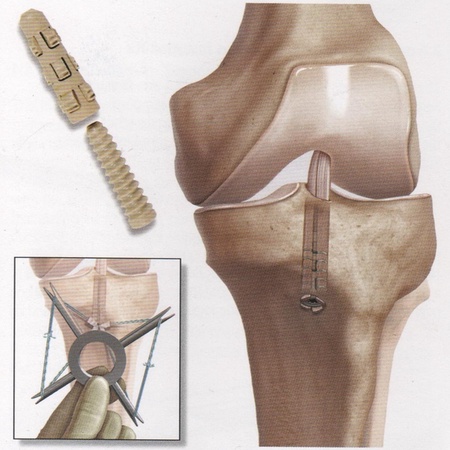 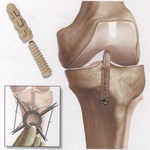 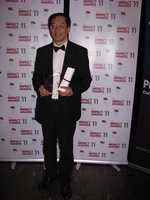 Damage to the cruciate knee ligaments has cut short the careers of many sports stars but treatment for the injury could be revolutionised by a new device which has just secured a top innovation award.

Dr Bin Wang and Dr Mahmoud Chizari from the University of Aberdeen’s School of Engineering  in partnership with Mr Martyn Snow, a leading specialist in joints and cartilage at the Royal Orthopaedic Hospital, have developed a new fixation mechanism which could improve the success rate in cruciate knee ligament surgery.

The team was funded by the NHS to study the rupture of the anterior cruciate ligament (ACL). The ACL is the main ligament in the middle of the knee which stabilises the knee joint and the team has developed a device to replace the screws traditionally used in this type of surgery.

ACL injuries are particularly common in sports people – Michael Owen famously ruptured his during the first few minutes of England’s World Cup match against Sweden in 2006 and Tiger Woods also had problems with his ACL during the 2008 US Open.

However it is not confined to sportsmen and women and surgery is required for ACL injury by around 11,000 people in the United Kingdom each year while 200,000 undergo procedures in America.

The new device, known as a GraftBolt® has been developed from the initial concept and brought to market in just five years and as a result the team was awarded the 2011 PraxisUnico’s Collaborative Impact Award.

The GraftBolt®is used in place of a traditional screw for securing damaged ligaments to the bone and has a superior performance, increasing the reliability of ACL reconstruction and reducing the need for follow-up procedures.

Dr Wang, who led the team at Aberdeen, said: “ACL injury affects around one in 3500 people.  It is commonly repaired using the patient’s own hamstring tendons to form a quadruple graft that is secured in the tibia – the shin bone - and femur – the upper leg bone.

“The NHS performs around 11,000 ACL reconstructions per year but the procedure is not universally successful, with failure rates of five to 25% often resulting in further surgery and long term problems.  The main cause of this is loss of graft fixation within the tibia in the early post-operative period.

“An ACL revision operation in the NHS costs £3,000-£3,500, and sometimes two operations are required.  Thus, use of GraftBolt® could save up to £6,000 per ACL reconstruction prevented.”

The intellectual property rights for the GraftBolt are owned by the NHS and it is licensed to a leading US orthopaedic device company, Arthrex Inc, which has developed the device into a commercially viable product. It is expected that the GraftBolt® will have approximately 20% of the US market share by the end of its first year of sale.. The product is expected to be available to the NHS later this year.