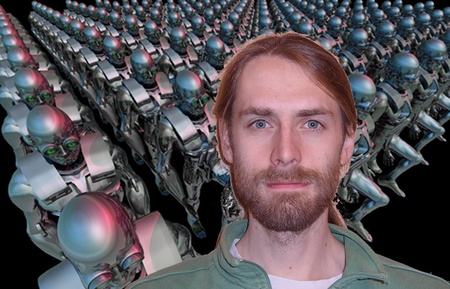 Could robots one day take the place of humans in duties such as caring for the elderly and if so, how can they ‘learn’ to take on such tasks?

“Will robots ever take over the world?”is the first topic in the new season of the University of Aberdeen’s popular Café Scientifique City series which gets underway on Wednesday (June 15).

Dr Frank Guerin from the University’s Computing Science Department will explore the subject of Artificial Intelligence from its early beginnings in the 1950s to advancements which could one day see the creation of human-like robots, capable of performing human tasks.

Since the 1950s, science fiction writers and academics working in the area often had great expectations about what would be achieved by now, but progress has been much slower. The difficulty of implementing human-like artificial intelligence has proved to be much greater than expected.

Dr Guerin said: “There is still a lot of interest in the area, and a lot of money is being poured into projects to create technology which can help with elderly care, for example. In Japan there are already human sized robots as home helpers, but they are quite limited in what they can do.

“To create a robot which can perform human tasks is very difficult; there are a number of issues to overcome such as vision, which is a huge challenge, and motor function - how we control fingers and arms.  In the early days of Artificial Intelligence people focussed more on core ‘thinking’, which led to good chess players for example, but nowadays people feel this is useless without a clear connection to perception and action in the world.

“In fact the focus on `high-level’ or `advanced’ human thought is now thought to be a distraction from the most important issues. The problems of intelligently connecting perception and action are solved by a guide-dog for example, but no robot can yet replace a guide-dog”.

Dr Guerin’s own research explores the idea of ‘baby’ robots, drawing on inspiration from biology and evolution, to create a system which can ‘develop’.

He added: “Rather than trying to build a fully functional ‘adult’ robot, the idea is to develop a ‘baby’ that would learn for itself. This idea is not new, but has been gaining popularity in the last ten years. A European consortium has developed `toddler’ robots, called the `iCub’ which are modelled on a three-year-old child.

“Psychological research shows that infants build new skills from old skills in order to solve problems during their play with objects. It is hypothesised that more abstract forms of thought are built on the concepts learnt during this early exploration with the physical world. We want to see how we can emulate this development process in an artificial system.”

Will robots ever take over the world? is the first in the new season of Café Scientifique City, held at Waterstone’s Union Bridge branch in Aberdeen, which will also cover a range of diverse topics including faces and attraction and the impact human life is having on our planet’s delicate ecosystem.

Café Scientifique City starts at 7pm  is free to attend, open to all and advance registration is not required for the events but visitors are encourage to come along early as capacity is limited.

For information on all of the Café Scientifique events visit: http://www.cafescienceaberdeen.co.uk/ or contact Dr Ken Skeldon Head of the University of Aberdeen’s Public Engagement with Science Unit by email at k.skeldon@abdn.ac.uk.

Café Scientifique is supported by a science engagement grant from the Scottish Government.