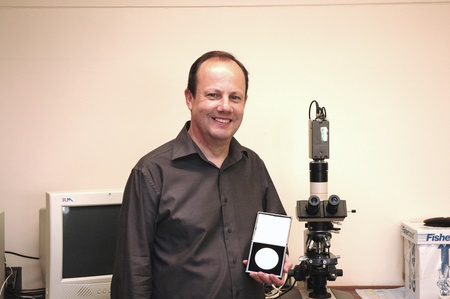 A University of Aberdeen chemist has been awarded the Cyril Hilsum Medal by the British Liquid Crystal Society.

Professor Corrie Imrie of the University’s School of Natural and Computing Sciences is only the sixth recipient of the medal, which was first awarded in 2006 to recognise the key role played by renowned British scientist Cyril Hilsum, Head of the Malvern Displays Group, in the development of liquid crystal materials and displays.

The medal is awarded to scientists for overall notable contributions to liquid crystal science and technology, normally made in the ten years preceding nomination.

Accepting the award Professor Imrie said: “I am absolutely delighted to receive this honour, and very grateful to the Committee of the British Liquid Crystal Society for considering me.

“Liquid crystals are a fascinating state of matter, having some properties characteristic of liquids and others typical of crystals. This duality of properties has important implications for the applications of liquid crystals which range from the familiar electro-optic displays to new types of lipids being used in gene therapy human clinical trials. Our research here at the University involves the design and synthesis of novel materials and investigation of their thermal characterisation and micro- and macrostructures. Most recently we have focussed activity on liquid crystal membranes for potential application in methanol fuel cells.”