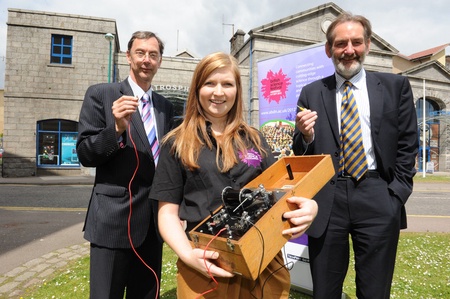 Aberdeen is well known for its scientific discoveries over the years and in 2012 the focus of Europe's science community will be on the Granite City when it hosts a major science festival.

The British Science Festival is Europe’s biggest event of its kind and will bring thousands of visitors to Aberdeen which has led the way with pioneering breakthroughs such as being first in the world to scan a patient using MRI and discovering how the body’s endorphins affect how we feel pleasure and fight pain.

Today (Monday June 6) representatives from industry; the Scottish Government; Robert Gordon University; Aberdeen College, education and community groups, and partner organisations which include the city’s Satrosphere; Aberdeen City and Shire Councils; Aberdeen Art Gallery and leading oil and gas companies will gather in Satrosphere to hear more about the festival which will take place between September 4 and 9 in 2012.

Festival organisers - the British Science Association, University of Aberdeen and TechFest-Setpoint - will also today launch a ‘call for proposals’ which is an opportunity for everyone involved in all kinds of science promotion, education and research to get involved in the Festival.

“The Festival is Europe’s largest celebration of science, engineering and technology which makes it a fantastic showcase for scientists keen to announce new, path-breaking research.

However the event is not just for those who work in science; it’s also a tremendous opportunity for the whole of our community - from business leaders to schools - to get involved and be part of this flagship Festival.”

Sir Roland Jackson, Chief Executive of the British Science Association, added: “We are thrilled to be returning, on our fifth visit since 1859, to Aberdeen; a diverse city with thriving cultural and educational institutions. The Festival is a partnership, and in order to put on the best possible show for the city, we invite the whole community to help us generate a programme of events to engage a wide audience and to stimulate discussion around the latest developments, their implications and the issues they raise.”

Dating back 178 years, the British Science Festival is held every year and was last in Scotland in 2001. Aberdeen hosted the festival in 1963.

At the 1963 event, leading Aberdeen academics of the time including Dugald Baird - pioneer of modern obstetric practices and Regius Chair of Obstetrics and Gynaecology at the University - and RV Jones often referred to as the ‘father of electronic warfare’, led the local line-up of lectures.

The highlight of the Young People's programme was a lecture by populist scientist of the day Dr Magnus Pyke.

For more information see the Public Engagement with Science website.