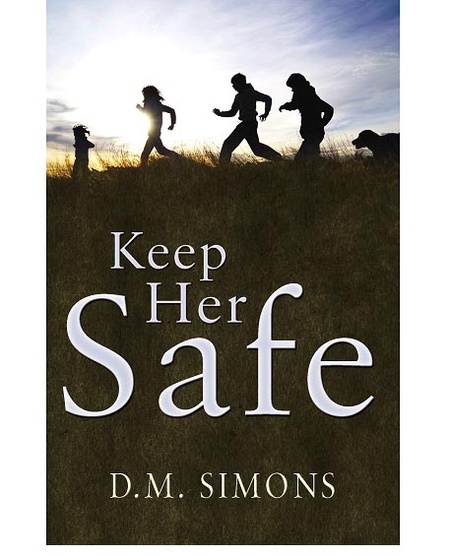 A University of Aberdeen scientist and mum-of-four has successfully juggled work and a busy home life to pen her first children’s novel.

Keep Her Safe is the work of lab manager Dr Delyth Reid who has used the pen name D.M. Simons on the thriller, which is for children aged 10 and over.

Delyth spent two years writing and polishing the page-turner, which sees three 13-year-olds encounter a strange human-like cloned creature during a camping holiday on the Isle of Skye.

“The idea for the book came to me when I was walking my dog on the dunes at Balmedie,” said Delyth, who has completed a couple of writing for children courses. “The story just seemed to come out of the dunes.”

Transforming the idea into a book that has been published by Troubadour and is available at Amazon, Waterstone’s and other retailers, was a major balancing act.

“I would get up really early at weekends and write and after driving my children to their various activities I would sit in the car and tap away on my laptop while they did their sports training or music lessons,” she added.

Delyth’s father and sister proofread the book and her children Hannah (13), twins Kevin and Jamie (15) and Kyle (16) were also a great support.

“The kids were very good at helping with the dialogue,” said Delyth. “If I’d written something that was a bit too 1970s they would laugh and come up with something better!”

When Keep Her Safe was published and copies were sent to Delyth’s home she was absolutely delighted although much of this was due to motherly pride.

“What I was most thrilled about was that the front cover of my book features a photo of the kids that was taken by my son, Kevin,” said Delyth.

“I’d sent him out one day to get shots of the kids running over the Balmedie dunes, silhouetted against the sky.

“When they came back Kevin used a programme to merge images together and shrank one picture of Hannah down to depict the mysterious creature in Keep Her Safe. I was so happy when the publisher agreed to use his creation.”

Delyth is donating some of the proceeds of book sales to one local and one national charity – Saving Sight in Grampian and the Macmillan Cancer Support.

“My mum died of cancer 20 years ago and she was really impressed by the Macmillan nurses who cared for her. Saving Sight in Grampian was also kind enough to support my post at the University for three years. I just wanted to give something back,” added Delyth.

Today (June 3) Delyth is selling copies of her novel in the University’s Institute of Medical Sciences.  On this day, without a retailer, she is able to donate to charity, £3 per book sold.