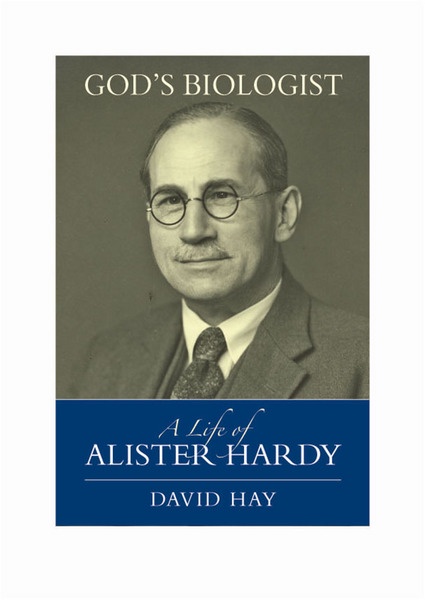 The life of a renowned biologist - a former Professor at the University of Aberdeen with a lifelong connection to the Torry Marine Laboratory - is explored in a new book.

Dr David Hay, an Honorary Senior Research Fellow in King’s College at the University of Aberdeen, has written God’s Biologist – A Life of Alister Hardy.

Sir Alister Hardy FRS was Regius Professor of Natural History at the University of Aberdeen from 1942 to 1945, before going on to the Linacre Chair of Zoology in Oxford.  However, alongside his zoological interests, he initiated a revolutionary approach to religion, seeing it as a biological phenomenon, and this brought about his return to Aberdeen to give the prestigious Gifford Lectures* during the sessions of 1963-64 and 1964-65.

He retained close links to the Granite City and the North East throughout his life particularly through his work in association with the Fisheries Laboratory in Torry and his fascination with the Moray Firth.

Dr Hay, originally from Rhynie, near Huntly, spent seven years researching the biography, which pays close attention to Hardy’s North East connections.  Indeed, it was in the summer of 1956 whilst a student reading zoology at the University of Aberdeen that Dr Hay first met Hardy – whilst working on a summer vacation job aboard the research vessel Discovery belonging to the Torry Lab.

He said: “I was the most junior crew member but my status as an undergraduate meant that I was allowed to dine in the officers’ mess.  One evening I found myself sitting next to Hardy and feeling somewhat overawed by his reputation. But by sheer chance I discovered that we shared an interest in the possible biological roots of religion.

“We were sailing in latitudes north of Shetland and the midnight sun made us oblivious of the time as we talked well into the early hours of the morning. It was there that our friendship began. Some years later I went to work for Hardy in his Religious Experience Unit in Oxford, and when he died I was appointed the Director.

“In 2003 I was invited by the Alister Hardy Trust to write his biography.It has taken seven years to complete, including a great deal of time spent in the Modern Manuscripts Room of the BodleianLibrary in Oxford, as well as the University of Aberdeen library and other institutions here and abroad.  I’m delighted that it is now being published.”

Alister Hardy was born in Nottingham in 1896, the son of an English father and a Scottish mother. He went up to Exeter College in Oxford in 1914, initially to study forestry, but he quickly gravitated towards zoology.

When the First World War broke out, he left Oxford for the army but returned when peace was restored to complete his degree and on graduating he worked as a naturalist in the Fisheries Laboratory in Lowestoft before becoming chief zoologist to the Discovery expedition to the Antarctic in 1925-27.  On his return, at the age of 31, Hardy was invited to found the Zoology Department in the new University of Hull, where his first Honours student was Cyril Lucas who eventually became Director of the Torry Lab. It was from Hull that Hardy came to take charge of the Natural History Department in Aberdeen, which in those days was in Marischal College.  He then departed for Oxford but returned to Aberdeen 16 years later to give his Gifford Lectures in Natural Theology

Dr Hay added: “My book highlights the fact that Hardy, via his Gifford Lectures, foresaw the current upsurge of interest in the biological roots of religion 50 years ago.   He was effectively the founding father of this approach to understanding religion, a fact that redounds to the credit of the University of Aberdeen, which was more open than Oxford to his ideas in this field and gave him more academic freedom to express them.”

God's Biologist is published by Darton, Longman & Todd as an illustrated hardback of 140,000 words. It will be launched in the St Peter’s Centre, Nottingham, on Saturday June 25.

* The Gifford Lectures in Natural Theology, which take place annually in the four ancient Scottish universities (Aberdeen, Edinburgh, Glasgow and St Andrews) were endowed by an eminent Edinburgh lawyer, Adam Lord Gifford and commenced in 1888.  The educator and historian Jacques Barzun described the Gifford Lectures as virtuoso performances and "the highest honor in a philosopher's career.”