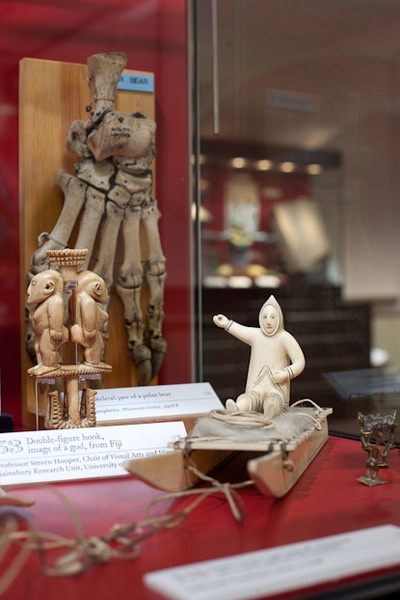 The first ever exhibition at the new King’s Museum in Old Aberdeen, ‘100 curiosities’, is coming to an end in three days’ time (Tuesday May 31) after welcoming more than 1500 visitors since its opening in mid-April.

‘100 curiosities’ features a hundred objects chosen from the university’s museum collections by a hundred different people, from  children to university professors, who each wrote 100 words describing their choice. The exhibition aims to challenge the idea of curiosity by exploring how objects can inspire the imagination, as each person chose their ‘curiosity’ for their own reason.

Some contributors picked objects relating to their studies or profession, such as the woodworker who chose a fifteenth-century carved panel from Aberdeen Mint and marvelled at its craftsmanship. Others chose artefacts that appealed to them from an unexpected angle, such as the researcher and father who chose a nineteenth century Arab coffee-pot while reflecting on the need for caffeine when raising small children.

The objects in the exhibition range from tiny flint shards to a six-foot long narwhal tusk; and from artworks selected for their beauty to grotesque objects such as a bound human foot which evoked childhood memories of visits to Marischal Museum.

Jenny Downes, the curator of exhibitions, said: “It was fascinating to see the different ways people responded to the objects, from making pots to writing poems. It shows what a varied audience the museum collections attract”.

From June 6 ‘100 curiosities’ will  be replaced by a new student-curated exhibition at King’s Museum, ‘Sounded Bodies’, which explores how sound is experienced in the body and influences our everyday reaction, emotions and relations.

But the objects picked by the contributors to ‘100 curiosities’ will not be out of sight after the exhibition closes. Selected objects will be displayed in specially designed open storage drawers in King’s Museum, where visitors can pull out the drawers and look at the contents.