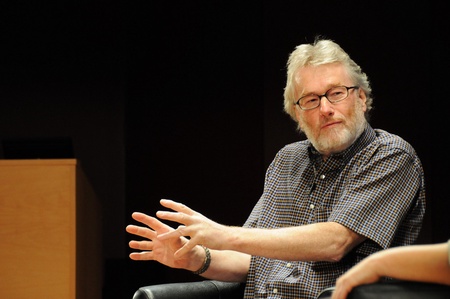 The 11th Word festival draws to a close with Stephen Robertson, one third of the of the Doric comedy act Scotland The What? sharing the story of their extraordinary success and a celebration of the life of Norman MacCaig featuring fiddler Aly Bain.

The events bring to a close a successful weekend which has seen thousands of visitors descend on the University of Aberdeen’s King’s College Campus and other venues across Aberdeen City and Shire.

He said: “These are difficult economic times in which to stage a festival of this kind and we are grateful for the continued support of our sponsors in allowing us to keep ticket prices low, with many of our events still free.

“We have enjoyed a wonderful atmosphere throughout the festival and despite threatening otherwise, the weather has been largely kind, helping us to make the most of our setting.

“The line-up for our 2011 festival is the most diverse we’ve ever had from poetry and fiction to science and history there really has been something for everyone and we are delighted to have welcomed authors of the calibre of Margaret Atwood and Iain Banks to Aberdeen.”

In addition to sell-out audiences at the headline events, many of the smaller events also proved popular with standing room only for politician Dennis Canavan, who discussed his 33 year career in Westminster and Holyrood, and for science writer Ian Stewart.

At Cafe Drummond on Belmont Street, Aberdeen, more than 100 people packed in to hear author Paul Trynka talk about his definitive new biography of David Bowie.

The associated Marathon Oil Children’s festival also proved popular with around 500 children visiting the campus over two days for sessions ranging from storytelling to puppet shows and interactive science displays.