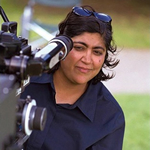 Bend it Like Beckham director Gurinder Chadha will take to the chair when the University of Aberdeen’s successful Director’s Cut series returns on Friday (March 18).

The award-winning film-maker will bring her blend of comedy and drama to King’s College Conference Centre for the free event, which is open to the public.

Chadha is one of the country’s most successful film directors and Bend It Like Beckham(2002) starring Keira Knightley and Parminder Nagra is one of the highest grossing British films in cinema history. She was awarded an OBE for her work in 2006.

Ahead of the public event, she will share her experiences of life behind the camera with around 20 film students from the University.

Chadha will follow in the footsteps of some of the biggest names of stage and screen when she adds Director’s Cut to her list of credits.

The Director’s Cut cast already includes world-famous naturalist, broadcaster and author, Sir David Attenborough, James Bond director Guy Hamilton, and actor Simon Callow, famous for his roles in Four Weddings and a Funeral and A Room With a View.

For the event Gurinder Chadha will be in conversation with Dr Alan Marcus, Head of Film and Visual Culture at the University of Aberdeen.

He said: “Gurinder Chadha is a hugely gifted writer and director who is a real auteur in the way she has developed a confident, energetic and stylistically colourful range of award-winning films over the last decade.

“We are very pleased not only to welcome her to Aberdeen for the Director’s Cut evening event, but also for a masterclass that she has agreed to do for students earlier in the day.  This is a special opportunity for them, and I am sure both events are going to be great fun and full of interest and insight into her particular form of movie-making.”

Director’s Cut will get underway at 6pm in King’s College Conference Centre, King’s College, University of Aberdeen. Entry is free put places must be reserved. This can be done online by visiting http://abdn.ac.uk/directorscut/