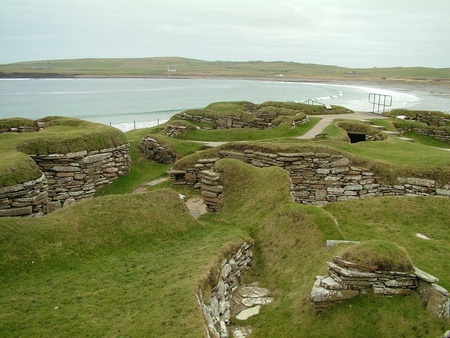 Scientists and researchers from across northern Europe will gather in Orkney on Thursday to learn how the islands protect their rich archaeological resources from rising seas and winter storms.

Orkney is home to some of the most important archaeological sites in Europe and many of these lie beneath the surface of the sea. As a result, the islands have implemented pioneering techniques to ensure that this important heritage is protected from climate change and the harsh northern weather for future generations.

A conference organised by the University of Aberdeen and the University of Highlands and Islands will be held at Orkney College UHI on Thursday and Friday to share this expertise through the CoastAdapt project - an international partnership of local municipalities, environmental organisations and academic institutions which seeks to adapt and respond to the impacts of climate change.

Orkney’s archaeological heritage is a rich source of tourism, attracting many visitors to the islands each year. Surveys undertaken shortly after the storm which hit the Outer Hebrides during January 2005 identified over 600 newly discovered sites of archaeological interest and future coastal erosion is expected to expose more sites.

However, as the action of the sea uncovers sites, they are only there for a year or two and then are destroyed due to storms.

Orkney has led the way in developing practices to ensure that the opportunities presented by the exposure of archaeological sites are realised before they disappear.

At the conference, funded by the Northern Periphery Programme and Historic Scotland, members of CoastAdapt will explore the best ways to take advantage of the new sites when they are exposed, as well as how to make the most of sites hidden well below the sea’s surface.

Professor Alastair Dawson of the University of Aberdeen is the Conference Organiser. He said: “This is an opportunity for groups from across northern Europe to learn from the Orkney experience of how to manage a priceless archaeological resource that is under pressure from winter storms and rising seas.

“Orkney is home to some of the most important archaeological sites in Europe such as Skara Brae and the Standing Stones of Brodgar.

“The objective of the event is to provide delegates with an understanding of coastal archaeology in a changing climate, and how, using the experience of Orkney as a prime example, improved interpretation can increase visitor numbers.”

Partners in the CoastAdapt project from northern Norway, Iceland, Ireland, Northern Ireland and from Scotland will be attending the workshop, as will many others with a professional or amateur interest in archaeological tourism from Orkney and further afield.

Dr Jane Downes, who leads archaeology for the University of the Highlands and Islands, said: "Coastal communities have so many resources and challenges in common that we see the opportunity to work with delegates from around the region as one to be grasped with both hands."

David Muir, CoastAdapt Project Coordinator, added: “Rising sea levels and storms are revealing many previously unknown archaeological sites and, if approached correctly, opportunities can be grasped in recording newly found archaeological remains which help in telling the story of our ancestors before they are washed away by the sea. The conference is important in exploring how this can be done and what lessons in good practice CoastAdapt partners can learn to take back to their own regions.”