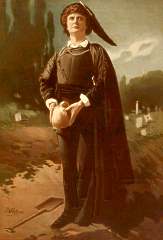 Who is Hamlet? It’s a centuries-old question, but now, a University of Aberdeen academic thinks she may have found a fresh answer.

In an article published today (March 3) in the Review of English Studies, Dr Lisa Collinson argues that Hamlet’s name originally came from a Gaelic word connected with grinding, and was linked at a much earlier date than previously believed to both a character in a play and dangerous waters.

Her theory builds on scholarly agreement that Shakespearetookthe core of his Hamlet character from ‘Amlethus’, a legendary figure found in ‘The History of the Danes’, written around 1200. Historians have long accepted that the name ‘Amlethus’ must be related to ‘Amlothi’, mentioned by Snow Bear, a tenth or eleventh-century Icelandic poet.

However, Dr Collinson, of the Centre for Scandinavian Studies at the University of Aberdeen, has uncovered evidence suggesting that Hamlet’s name came first from medieval Gaelic, before being incorporated into the Old Norse tradition. There have been Gaelic claims for the name in the past, but Dr Collinson makes a new link to a player in an overlooked tale about a doomed king.

She said: “Earlier scholars based theories about the Gaelic origins of Hamlet on an odd name – ‘Amlaide’ - embedded in a short verse found in Irish annals. They constructed interesting arguments which allowed for Celtic influence on ‘Amlothi’, but they struggled to explain the form of the annal name, which remains obscure.”

Dr Collinson proposes that a better Hamlet name can be found in a mysterious tale called ‘The Destruction of Da Derga’s Hostel’, which is thought to have been compiled in the eleventh century, based on eighth- or ninth-century materials.

There, a flawed king is killed in a strange hall, filled with uncanny figures. Amongst these are three players – Mael, Mlithi and Admlithi. It is the last of these whom Dr Collinson believes provides the key to the mystery of the Hamlet name.

“As soon as I saw ‘Admlithi’, I thought of Hamlet,” she explained. “But I persuaded myself that the possible link couldn’t be demonstrated in a scholarly way. It’s taken me several years and a lot of encouragement from colleagues to follow this up properly.”

Dr Collinson believes that the name ‘Admlithi’ was coined by Gaelic-speakers and then travelled to Scandinavia, possibly via Orkney.

“Snow Bear’s verse containing the name ‘Amlothi’ has been connected to Shakespeare’s indirect source, ‘The History of the Danes’, because of a grinding sea motif which seems to underlie both medieval Nordic texts,” she said.“But we can take this further, and match ‘Amlethus’ and ‘Amlothi’ with the Gaelic player name ‘Admlithi’ which is related to a Gaelic word for ‘grinding’.”

The crux of Dr Collinson’s argument is that Snow Bear’s ‘Amlothi’ was probably a corruption of this Gaelic name, used to describe part of the grinding sea.

“Although the player Admlithi had only a tiny role in the Irish tale, his strange name had the potential to be used in many different contexts. At an early date, I think it was used bysuperstitious sailors to refer to a dangerous sea-feature, such as a whirlpool.”

One candidate is the maelstrom called ‘Coire Brecain’, which was compared to a mill in a medieval Irish glossary. This was probably either a whirlpool near Rathlin Island, or Corryvreckan in the Hebrides.

“The name ‘Amlothi’is highly unlikely to be Norse in origin,” Dr Collinson explained. “There really is no convincing way to explain its form with reference to any known Norse words – although this hasn’t prevented fine scholars from trying in the past.

“By contrast, the name Admlithi could certainly have been used by sailors to describe grinding seas, and it’s likely that sailors played a critical role in its transmission to Scandinavia. The Icelandic poet Snow Bear was probably a sailor himself.”

If Dr Collinson’s hypothesis is correct, then Hamlet’s association with players goes back several hundred years longer than has previously been believed.

She added: “What’s most exciting to me is the idea that a version of the name ‘Hamlet’ may once have described not just a man ‘as mad as the sea’ or threatened by a ‘sea of troubles’, but in fact the sort of ‘gulf’ or whirlpool to which Shakespeare had the character Rosenkrantz compare the ‘cess of majesty’ itself. According to this theory, Hamlet becomes, by name, a whirlpool-incarnate — in essence, a saltwater-vortex, somehow made flesh. I couldn’t even begin to imagine how that might be played – but I hope thatsomeday, someone, somewhere will try.”