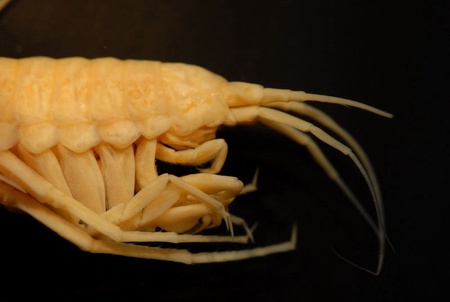 It’s white, around 6cm long and has so far only been seen scuttling across the soft sediment floor five to six miles below the world’s deepest ocean.

It’s a new species of shrimp and it’s been named Princaxelia jamiesoni after the University of Aberdeen scientist who discovered it in trenches at the bottom of the North West Pacific Ocean.

And it’s almost four decades since the last ’new’ member of this shrimp family was discovered.

Dr Alan Jamieson from the University’s Oceanlab was on a ‘HADEEP’ research cruise when the shrimp - or amphipods - were filmed and caught in the Japan Trench in 2008 at 7703m deep and then again in 2009 at the nearby Izu-Bonin Trench at depths of 9316m.

The Research Fellow is Research Manager of the HADEEP Project – a collaboration involving the Universities of Aberdeen and Tokyo which is investigating life in the deepest parts of the ocean.

Dr Jamieson said: “We caught lots of the usual animals on both research cruises however in amongst our haul were these long white creatures which no-one knew anything about.

“The samples eventually came back to Aberdeen and those unknown species sat under my desk for over two years until our next HADEEP trip took us to New Zealand where I met amphipod taxonomist Dr Anne-Nina Loerz.

“I told her about these long white spiky things that we had filmed and caught and was delighted when she said she was an expert in such creatures.”

Dr Jamieson sent the samples to Dr Loerz who then established that they were a new species.

The taxonomist then named them after Dr Jamieson saying his “dedication to trench research is greatly advancing the scientific knowledge about deep sea biology.”

The genus Princaxelia was named after Prince Axel of Denmark (1888-1964) in 1959 after the great Danish Galathea expeditions recovered the first specimens of this kind of shrimp. The last species to be found was in 1977.

This new species, the jamiesoni, is only the fourth species of Princaxelia to be discovered.

Dr Jamieson, who is originally from Edinburgh, added: “It is an extraordinary creature with a long elongated body thought to facilitate swimming over great distances. Yet it is extremely manoeuvrable at short ranges, capable of fast predatory attacks.

“It is another example of the extraordinary creatures that inhabit the most extreme depths of the oceans and to have this one named after me is a great honour, both for me, and my family.”

Dr Jamieson and his HADEEP colleagues head off to Japan again tomorrow (March 4) where, among other things, they hope to observe and collect further specimens of Princaxelia jamiesoni.

Meanwhile Dr Leorz’s description of the new shrimphas just been published in the journal Zoologica Baetica and the specimens themselves are currently residing in the National Science Museum of Tokyo.