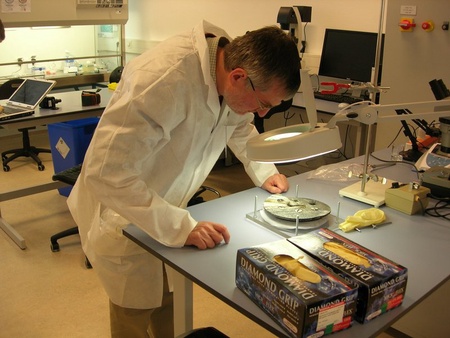 Rocks on Earth could help pave the way for new understanding of the potential existence of life on Mars.

In 2004 a scientific breakthrough was made when methane was detected in the Martian atmosphere.

The presence of the gas – much of which on Earth is produced by living things – is the strongest indication yet that primitive life could exist on the planet.

Now a team of geologists and microbiologists from the University of Aberdeen are looking at how rocks sourced from across the British Isles could help explain the existence of methane and how it could signify life on the red planet.

Professor John Parnell, who is leading the study and who will speak about it at Royal Astronomical Society in London this week, said: “The discovery of methane on Mars was the biggest indication to date that life – in the primitive form of bacteria – could potentially exist on the planet.

“One of the reasons for this we believe is because methane should only last for a short time in the atmosphere on Mars until it is destroyed - but its continued presence shows that something is replenishing it.

“This indicates that the methane is possibly being produced by a biological process – i.e. a simple form of life.

“If this life does exist, the hostile surface environment of Mars means it is most likely to live at subsurface levels, in rocks on the planet.

“Our research will look at a number of different types of rocks sourced from across Britain that replicate rocks found on Mars.

“We’ll be conducting experiments to see which of these rocks retains the most methane absorbed from sources on the Earth.

“The type which retains the most would be the optimum rock for scientists to analyse on Mars in the future, to understand the source of the methane on the planet.

“Actually analysing methane on Mars is something we’re likely to be capable of in this decade.  However we will not be able to take rock samples from Mars back to Earth for analysis until the 2020s.”

The team of scientists will also analyse the rocks to enhance understanding of how potential life could exist at subsurface levels on Mars.

Dr Gail Ferguson, Senior Lecturer in Medical Microbiology at the University of Aberdeen said: “If life does exist on Mars it is most likely to be found deep below the planet’s surface under high-pressure conditions.

“We will analyse methane-generating microorganisms on Earth that live under similar conditions - deep in the sediment in our oceans in a high-pressure environment.

“If we can understand how they produce methane in these circumstances, we could potentially apply the same logic to understanding similar microorganisms – if they do exist - on Mars.”

The three-year research project is funded by a grant from the Science and Technology Facilities Council (STFC).

Professor Parnell will speak about the project at the Royal Astronomical Society in London on Friday (January 14).