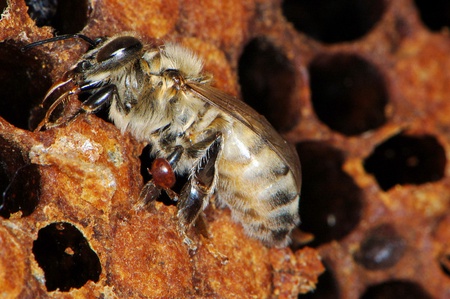 Scientists may be able to halt global honey bee decline by forcing the self-destruction of deadly Varroa mite, which is thriving in the freezing weather.

The blood-sucking Varroa is the biggest killer of honey bees world-wide, having developed resistance to beekeepers’ medication over the past decade. It particularly thrives in cold winters when colonies are more vulnerable while huddled together tightly to keep warm.

Now researchers from the Government’s National Bee Unit and Aberdeen University have worked out how to ‘silence’ natural functions in the mites’ gene – with the potential to make them self destruct.

Dr. Alan Bowman from the University of Aberdeen said: “Introducing harmless genetic material encourages the mites’ own immune response to prevent their genes from expressing natural functions. This could make them self destruct.

“The beauty of this approach is that it is really specific and targets the mites without harming the bees or, indeed, any other animal.”

Dr Giles Budge from National Bee Unit, part of the Food and Environment Research Agency (Fera) said: “This is environment-friendly and poses no threat to the bees. With appropriate support from industry and rigorous safety testing, chemical-free medicines could be available in five to ten years.”

In developing this, scientists have used the Nobel-Prize Winning theory ‘RNA interference’, which controls the flow of genetic information. So far the ‘silencing’ process has worked with a neutral Varroa gene, which has no significant effect on the mite. But scientists now need to target a gene with the specific characteristics that are perfect to force the Varroa to self destruct.

Tests by other scientists have shown the treatment can be added to hives in bee feed. The bees move it into food for their young, where the Varroa hides.

2.            The Varroa mite originally attacked the Asian honeybee but recently jumped to the European honeybee, which has a poor natural defence. Beekeepers use chemical controls but can never eradicate it. The mite injects viruses, suppresses the bees’ immune system and feeds on blood. If untreated, or given inappropriate chemicals, it can destroy colonies.

5.            In 2009 the Government launched the Healthy Bees Plan,a 10-year strategy to protect and improve the health of honeybees in England and Wales. To help it start, Defra and the Welsh Assembly Government (WAG) contributed £2.8million up to 2011.

6.            In June 2010, Defra and WAG contributed £2.5million to the Insect Pollinators Initiative for research into understanding and mitigating the biological and environmental factors affecting insect pollinators.

7.            In October Defra announced support for the British Beekeeping Association to increase the number of quality trainers for beekeepers across England and Wales. This is to teach amateurs the skills to care for bees and guard against pests and diseases.