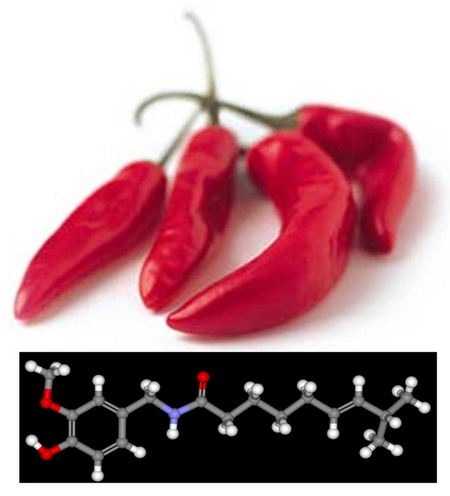 Aberdeen scientists have discovered a ‘switch’ that turns on a gene that lets us feel pain, in a finding that could be a step towards the development of new painkilling drugs.

The University of Aberdeen researchers also found that capsaicin – the compound in chillies that gives them their kick – can also turn the switch on.

The findings published just today in the journal Neuro-signals increase our understanding of the genetic mechanisms behind pain, which is essential for the development of new therapies.

The researchers studied the mechanics of the pain gene known as substance-P - first shown to be involved in chronic inflammatory pain more than 30 years ago.

Genes on their own are inert and need ‘switches’ – known as promoters and enhancers - to turn them on in the right place, at the right time and at the right level.

One of the major finding of the study was that these switches don’t act in isolation and need other switches to ‘speak to’ in order to activate the gene.

The research team – based in the University’s Kosterlitz Centre for Therapeutics - spent five years looking for the switches that turn the substance-P gene on in a group of cells called sensory neurones.

Dr Lynne Shanley, post-doctoral scientist, said: “Finding the switch was like looking for a needle in a haystack. However, by comparing the genetic sequences of humans, mice and chickens we were able to find a short stretch of DNA that had remained unchanged since before the age of dinosaurs.

“We were delighted when this little bit of DNA turned out to be a genetic switch, or enhancer sequence, which could turn on the substance-P gene in sensory neurones.”

Mrs Marissa Lear, the head technician on the project, said: “Because the switch was active in these sensory neurones we applied capsaicin, the ‘hot’ chemical in curry and chilli to see if the switch could be turned on and, amazingly, it was.”

Chronic inflammatory pain in the form of arthritis or cancer pain affects many thousands of people in Britain each year and, in many cases, is untreatable using current therapy.

Professor Ruth Ross, head of the Kosterlitz centre and a co-author on the paper, said: “Understanding the genetic processes that trigger inflammatory pain is essential to developing new therapies. Finding this new substance-P enhancer sequence, and showing that it can respond to capsaicin, has allowed us to add another part of the complex jigsaw puzzle that makes up the inflammatory pain response.”

Dr Alasdair MacKenzie, who lead the project added:  “In order to discover this genetic switch we had to develop new technologies which are now unique to the Kosterlitz Centre and which can be used to look for other important genetic switches. This is very important as medical geneticists now know that 88% of heritable diseases such as arthritis, obesity, depression, heart disease and dementia may be caused by faulty genetic switches rather than faults in the genes themselves.

“By finding the switches which turn on the substance-P gene in the parts of the body which deal with pain and then finding out how they work, we will be able to accelerate the development of novel drugs that target these switches.”

Dr Alasdair MacKenzie is available for interview on the phone. To arrange contact Jennifer Phillips on 01224 273174.