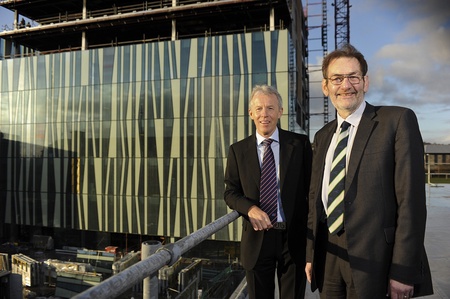 Global shipping and energy services firm the Craig Group and the Craig family have today announced a donation of £1 million towards the University of Aberdeen’s new state-of-the-art library building.

The money will go towards the creation of the top floor of the new library which is due to be opened in September 2011. It will be named the Craig Floor within which will be the David Craig Suite, in memory of Craig Group chairman, David Craig, who passed away in April this year.

The Craig Floor will have stunning views across the North Sea where David Craig spent much of his young working life and which forms a rich part of the Craig Group’s heritage. It will also afford spectacular views to the centrepiece of the new structure, the inner atrium, which leads directly to the top floor.

The Craig Floor will house the University’s renowned divinity and philosophy collections which will be used to support some of the UK’s top research academics in these fields that are based at the campus.

The David Craig Suite of the new library will house a series of flexible conference and seminar rooms and will be used for University and student events as well as being made available to the wider business community for meetings and informal evening receptions.

Commenting on the donation and the benefits the new building will bring to the University and the wider community, managing director and Chairman - Douglas Craig, said:  “We are delighted to contribute to this magnificent new building which will be an impressive legacy for the whole community for many generations to come.

“Overlooking the North Sea, the seventh floor will have amazing views and it is fitting that it will be in memory and honour of my father David who pioneered fishing in the North Sea, both as a skipper and then at the helm of the group for more than  70 years.

“The North Sea and the communities of the North east continue to be the bedrock of the organisation’s business interests and are central to the continued success of the group.”

“David Craig will be long-remembered for his strong Christian faith and it is therefore also fitting that the University’s exceptional Divinity collection be housed on this floor.”

The Craig Group family has strong ties with Aberdeen University as the current Chairman Douglas Craig completed his undergraduate studies in accountancy and political economics at the campus.  Former Chairman David Craig was recognised by the University three years ago for his services to the local business community and awarded an Honorary Doctorate.

Professor Ian Diamond, Principal and Vice-Chancellor, University of Aberdeen said: “We are honoured and extremely grateful that Douglas has chosen our new University library to make a lasting tribute to his late father David who was such an inspirational figure not only in the industry but across the North-east.

“The history of the University is inextricably linked with that of the City and the North Sea, as is the history of the Craig family and growth of the Craig Group. It is very fitting that the top floor of our new library will bear the Craig name – offering stunning views over the sea that has shaped our common histories, and recognising our proud links with local industry and enterprise.”

The library will be equipped with 13 kilometres of book shelves, 1,200 work stations, modern IT systems, exhibition rooms, educational facilities and an area dedicated to the University’s distinguished collections of rare historic manuscripts, books, and archives.

For the first time, these treasures will be widely accessible for research and learning, and showcased to the public through a programme of exhibitions, educational and cultural events.

The Craig Group is one of Scotland’s top 100 companies and employs more than 1000 people worldwide.  Established in 1933, it has grown from a small family fishing business to a global enterprise and is a multi - award winning company that has been awarded the Queen’s award for excellence and the Northern Star Business Award for Overall Business of the Year in the large business category.