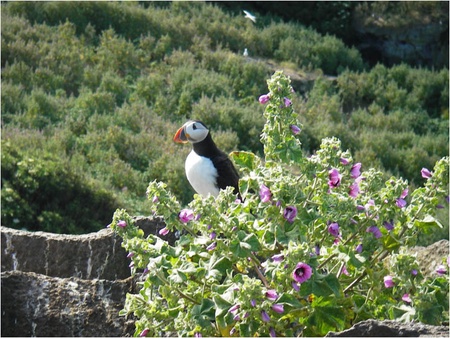 Scientists are studying an invasive shrub which is threatening Scottish puffins and other seabirds.

Researchers at the University of Aberdeen are trying to find out why tree mallow – a close relative of attractive garden plant ‘Lavatera’– has become so invasive on seabird islands of the Firth of Forth.

The pink flowered tree mallow, which can grow up to 3m tall, occurs naturally in the south-west of England and in Wales, where it is a harmless species of coastal vegetation.

But centuries ago the biennial plant – which is not part of the original Scottish flora – was introduced to Bass Rock. It has since spread to other seabird islands where it has, in places, replaced the native flora and severely restricted the availability of burrows for breeding seabirds like puffins.

Craigleith – home to one of the UK’s larger puffin colonies – was invaded by tree mallow to the extent that great management efforts are necessary to suppress this plant.

Louise Ross, from the Aberdeen Centre for Environmental Sustainability, a research unit at the University of Aberdeen, said: “Many people will have viewed Craigleith as just a little island in the shadow of its renowned neighbour, the Bass Rock.  However, Craigleith is the scene of Britain’s most dramatic example of how a single non-native plant can transform an entire ecosystem.

“In 2006 more than 75% of the island was covered by dense stands of tree mallow which left very little space for any plants of other forms of wildlife. Of particular concern is the dramatic reduction in the number of breeding puffins, an iconic species of high conservation and economic value.”

Dr René van der Wal, ecologist at the University and part of the Aberdeen Centre for Environmental Sustainability, added: “It is mightily impressive to see a plant taking over a whole island but this is clearly not helping seabirds trying to make a living in that very place.”

Aided with funding from the Natural Environment Research Council (NERC) Dr van der Wal and Ms Ross have been running field experiments on tree mallow over this summer which they hope will give them an insight into the causes of this invasive behaviour.

They grew more than 1500 tree mallow plants in glasshouses from seed - half of which came from an invasive Scottish population – and then planted these out in coastal grassland at four locations around the Firth of Forth and a further four on the Lizard peninsula in Cornwall.

The plants were then subjected to various combinations of rabbit grazing, disturbance and nutrient addition.

Ms Ross said: “We subjected the plants to these tests because these are conditions that commonly occur on seabird islands and are thought to help the tree mallow spread quickly and take over the native vegetation.”

The researchers are currently harvesting the plants and will then study them in the hope that this will explain under which combinations of circumstances tree mallow can turn invasive.

They are also travelling around the British coast carrying out a survey of existing tree mallow populations this autumn.

Dr van der Wal added: “We will then attempt to work out the ecological differences between the invasive and benign populations, giving further insight into the “Jekyll and Hyde” behaviour of this intriguing species.”