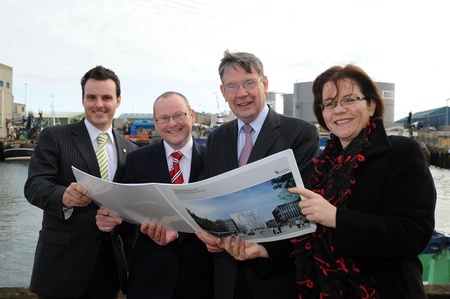 The Aberdeen-based Scottish Fishermen’s Trust is donating £50,000 towards the prestigious new Library project at the University of Aberdeen for the creation of an education area which recognises the vital role played by commercial fishing in the cultural and historical heritage of the North East of Scotland.

Construction of the prestigious £57m flagship library is now well underway and the donation has been made to support the creation of a seminar room in a part of the building which will commemorate the major industries which have shaped the history of the North East of Scotland and promote their continued importance in Scotland.

The room commemorating fishing will form part of a suite of rooms on the second floor of the new Library and Special Collections Centre. The area will include an etching in a glass wall with images capturing the spirit of the Scottish fishing fleet and its heritage, which will be created from materials in the University’s own archive.

As well as a major focus on the heritage of fishing, the room will look to the future by highlighting how Scotland’s modern fleet is committed to sustainable harvesting and environmental responsibility.

James Brown, chairman of the Trust, said: “Fishing forms an incredibly important part in our heritage and we are delighted that in making this donation we are taking the opportunity to ensure that its importance is given due and proper recognition.

“The fishing industry is deeply entwined in our way of life and has enriched the historical and cultural distinctiveness of the area.

“The new library will be an iconic building and it is important that it reflects the role fishing has, and continues to play, in our community. As well as a focus on the past, the room recognising fishing will look to the future and the determination of our fishermen to protect an extremely valuable and renewable natural resource.  We are confident this will prove to be an extremely important educational facility for current and future generations.”

“The fishing industry has played a vital role in shaping the cultural fabric of the North East of Scotland and continues to do so today therefore the library suite would not be complete without representation from the fishing industry.

“We are delighted that the Scottish Fishermen’s Trust shared our vision for the project and has chosen to become involved. Universities and the fishing industry currently face a changing environment but are resolved to move into the future positively and emerge stronger than before. This partnership physically commemorates this shared goal as well as looking back to the history of fishing as an industry and a community which has shaped the region in which we live.”

To find out more about the University’s new Library, including a virtual fly-through, please visit  www.abdn.ac.uk/newlibrary