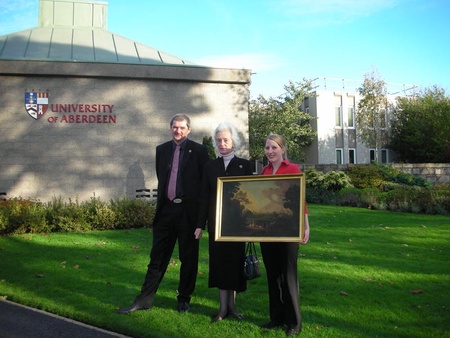 A picture showing a strikingly accurate depiction of Old Aberdeen in the 19th century by the artist Alexander Nasmyth was given to the University of Aberdeen today (Monday October 25).

It was painted byNasmyth, often known as the ‘father of Scottish landscape painting’, in 1808 and was bequeathed to the University by Miss Anne Dixon, of Manor House Farm, Hanging Langford, Wiltshire.

Miss Dixon, who had the painting on the wall of her drawing room, believed for many years that it depicted St Andrews until it was spotted by her friend Dr Jennifer Carter, formerly of the History Department at Aberdeen University.

She identified the buildings as those of Old Aberdeen and thinks it probable that the figures in the foreground, including two in red gowns, would have been King’s students.

As a result, Miss Dixon generously left the painting to the institution in her will and on Monday it will be handed over to the University another of Miss Dixon’s friends, Miss June Taylor who has kindly brought the painting to Aberdeen.

Dr Carter said:“The City’s Art Gallery already owns a very similar Nasmyth, and it will be interesting for the art experts to compare the two pictures.  Without a detailed comparison we cannot say if one is an original and the other a copy, or if, as seems more likely, both came from the Nasmyth studio.

“It has been suggested in Derek Ogston and Margaret Carlaw’s book King’s College Aberdeen that Nasmyth did not paint the picture in Aberdeen, but copied it from an earlier watercolour of a similar view by R.Seaton. Whatever the truth of these matters, this view of Old Aberdeen in the early nineteenth century is a strikingly accurate depiction of  its buildings, and the delicately painted figures in the foreground include two in red gowns, probably King’s students.