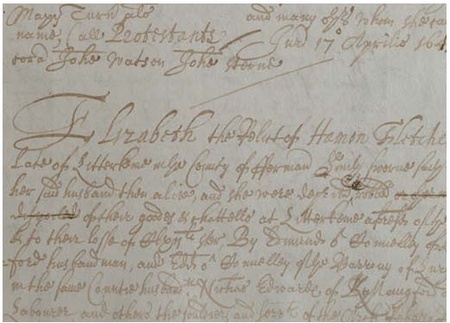 The first-hand testimonies of thousands of people who witnessed the bloody rebellion that paved the way for centuries of sectarian conflict in Ireland have been released online.

The unparalleled collection of accounts, which provide graphic details about the massacres and plunder accompanying the Catholic uprising of 1641, will be available for free at http://www.1641.tcd.ie/, giving users the chance to scrutinise their contents in depth for the first time.

It follows a painstaking three-year research project in which all 19,000 pages of the original depositions (more than 5,000 separate sworn statements), many of which are almost illegible, were transcribed by a team of researchers, led by the Universities of Cambridge and Aberdeen and Trinity College, Dublin.

Researchers believe that the site’s launch will enable historians to understand much more fully what remains one of the least-understood massacres in European history, in which many thousands of men, women and children lost their lives.

Experts are still divided over whether the uprising by Irish Catholics in October 1641, which followed decades of simmering tension with English Protestant settlers, was meant to be bloodless, or if violence was always intended.

In the event, the rebellion only enjoyed brief and partial success, before it sparked a decade of savage warfare that culminated in Oliver Cromwell’s equally brutal conquest which began in 1649 (with the infamous Drogheda Massacre).

In its aftermath, half of all the land of Ireland was taken from Catholics born in Ireland and given to Protestants from Britain. So deep was the impression left on the national consciousness that images of the massacre are still used on banners by the Orange Order.

Despite their significance, however, the depositions have never been studied in full – partly due to their poor condition, and partly because of the sheer quantity of material involved. The digitisation means that they can now be examined by historians and members of the public anywhere in the world.

Professor John Morrill, from the University of Cambridge, one of the project’s principal investigators and chair of the management committee, said: “The events of 1641 transformed Irish history and, as a result, can be justly said to have transformed British and world history as well.”

Professor Tom Bartlett, Chair in Irish History and principal investigator from the Aberdeen arm of the project team, said: "The sheer volume of witness testimony is what makes the depositions so valuable. Transcribing them has enabled us to get down to what ordinary people were saying about these events and is of interest not just in terms of what they were saying but how they were saying it. “

“There is a huge amount to be learned from the language they were speaking and the words they were using about the make-up of the population and everyday life from their views of the world around them to the agricultural instruments they were using.”

“We knew when we began that this was a very significant resource but the range of what we can learn from it has been wider than any of us expected and will be of interest to economic, social and cultural historians, linguists, genealogists and anyone interested in popular action.”

As a result of the digitisation of the depositions, linguists from the University of Aberdeen were awarded £334,000 under the Arts and Humanities Research Council (AHRC) Digital Equipment and Digital Enhancement for Impact scheme, to help devise new techniques to analyse the manuscripts.

The year-long project, which began in March, will see a team of researchers interrogate the database for a variety of information including the development of the English language in Ireland and the settlers’ lifestyle there in the 1640s, the language of atrocity appearing in the witness testimony and the reliability of the evidence in the depositions.

Few gory details were spared when the testimonies were first compiled, as the newly-digitised collection reveals. One of the best-known is that of Eleanor Price, a widow and mother of six from County Armagh, who was imprisoned by insurgents before five of her children were drowned, along with other settlers, in the River Bann at Portadown Bridge.

The account describes how the rebels “then and there instantly and most barbarously drowned the most of them: And those that could swim and come to the shore they either knocked them in the hands and so after drowned them, or else shot them to death in the water.”

As a result of the new online resource, users will be able to view both the transcription of the testimonies, and a digitised version of the original document, side-by-side on their computer screens.

Ahead of the launch of the digitised collection, and to mark the 369th anniversary of the rebellion itself, an international seminar was held at Trinity College Dublin on Friday, October 22. Professor Jane Ohlmeyer of TCD spoke about the project, Professor John Morrill of Cambridge spoke about the consequences of the Rebellion and Massacre for Britain and Ireland, and Professor Ben Kiernan of Yale compared the Irish massacres of 1641 with massacres in modern times.

An exhibition, “Ireland in Turmoil: the 1641 Depositions”, was also opened by the President of Ireland, Mary McAleese, and Dr Ian Paisley spoke at the event. The display runs until April.

Background to the rebellion and the depositions

The roots of the rebellion date back to the 16th century, when English settlers moved to Ireland and in many cases dispossessed its Catholic landowners as part of a “Plantation” policy by the English Crown. By 1641, hostility between the Catholic gentry and the immigrants was at boiling point.

In October, prompted by a threat from English Parliamentarians to challenge surviving Catholic rights in Ireland, the Irish Catholics devised a pre-emptive strike. Their plan was to seize Dublin and other key towns and then force recognition of a list of demands, restoring their pre-settlement rights.

But in the weeks that followed, the rebellion rapidly turned into a sequence of bloody assaults. Thousands were murdered or died after they were driven out naked into the winter cold. Many thousands more fled to Britain.

Problems at home prevented the English government from raising funds for an army to protect the settlers. Instead, it borrowed the money from 2,000 venture capitalists – known as the “Adventurers” – on the understanding that they would eventually be given millions of cares of Irish land in return.

To establish which land was to be confiscated, witnesses to the massacre were questioned by government officials and their “depositions” were written down for use in court.

In 1741, the testimonies were given to Trinity College Dublin. A total of 3,400 accounts survive today, but a combination of inconsistent spelling, grammar, punctuation and almost indecipherable handwriting made many of them difficult to read prior to the transcription project.

Extracts from the collection

The took and seized on her this deponent, and five of her Children: & above threescore more Protestants at that time in the Church of Armagh and having stripped them all of their clothes cast tham all into Prison: About a fortnight after the Rebels (especially the said Sir Phelim) proposed & offered to send some of them into England & to given them safe conduct and free passes for that purpose: which offer being embraced, then the Rebels declared that they would suffer the Children & those that they knew had no means left, to go: But as for those that they conceived had hid or concealed anything from them those they stayed, & in particular they stayed their in prison with the said Sir Phelim, the Lady Crawfield & her Children to the Lord Cawfield, whom after they were murdered, Mrs Taylor & her son (whom they after hanged to death) & her this deponent Mr Robert Ditham, whom they after murdered and mangled to pieces and his wife Peirce Newberry whim they also afterwards murdered Tho: Newberry & Henry Newberry one Richard Stubbs, Richard Warren whom they hacked all to pieces and divers other: But as to this deponents five children and about 40 more young & poor prisoners those were sent away with passes from the said Sir Phelim together with about threescore & fifteen more protestants from other places within the parishes of Armagh & Loughgall: who were all promised to be safely convoyed & sent out to their friends in England: Their Commander or Conductor for that purpose appointed being as he quickly after proved to be a most bloody & cursed Rebel by name Captain Manus O’Cane & his souldiers: which said Captain Manus O’Cane & his souldiers haveing brought or rather driven like sheep or beasts to a Market, those poor prisoners being about one hundred and fifteen to the bridge of Portadown: The said Captain and Rebels then and there forced & threw all those prisoners (and amongst the rest of the deponents five children by name Adam John Ann Mary and Joan Price off the bridge into the water and then and there instantly & most barbarously drowned the most  of them: And those that could swim and come to the shore they either knocked them in the hands & so after drowned them, or else shot them to death in the water.

‘William Clarke … Tanner, a British protestant sworn and examined deposed that … he was by the rebels imprisoned for nine days with at least one hundred men, women and children. During this time, many of his fellow prisoners were tortured by the rebels who strangled them aong many other cruelties. After his imprisonment, Clarke with about 100 other men women and children were driven like hogs about six miles to a river called the Bann in which space of six miles these Christians were barbarously abused by the rebels. They forced them and pricked them with swords and pikes in their sides. They murdered three on the way to the river, namely William Fullerton, minister of Levileglish, and one Master Abree and Richard Gladwish. They drove the rest down to the river and then forced them to go up on to the bridge. This was then cut down and the rebels then stripped the said prisoners naked and with their pikes and swords and other weapons thrust them down headlong into the river and there they immediately perished and those who tried to save their lives by swimming to the shore the rebels shot them.‘

being all armed some with pistols others with skeins hatchets swords & other weapons, came all together on a Sabbath day, about Candlemas 1641, suddenly & Rebelliously into the refining house of the said mines of Knockanaderrick. And then & there in severall rooms of the same, and in places near the same did assault and set upon the said English persons, and stripping some of them naked they then and there with their said weapons did most miserably and mortally slash, cut, knock in the heads & wound them that they then and there died, There being then and there such a great loud and dangerous storm of thunder, lightening, rain, wind and tempestuous weather That those in the 2nd, 3rd or other rooms of the house could not (as was credibly reported hear the cries or noise of the slain people in the first next or any other room but where themselves were: & yet the same tempest (the vehemence whereof was such as the like was not before observed) could not nor did soe deter but animate those bloody murderers to desist or forbear until they had then and there butchered and absolutely putt to death these protestants.