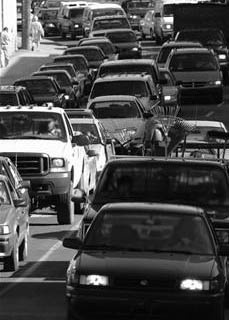 Congestion charging would be more accepted by the public if they were to experience it first under a trial period.

New research has shown car users are prepared to change their behaviour if the positive benefits are clear to them.

The study by Dr Geertje Schuitema from the University of Aberdeen’s Centre for Transport Research focused on London and Stockholm where congestion charges have been successfully introduced.

The findings suggest proposals for congestion charging in towns across the UK may be better received if individuals were given practical experience of its positive impact - for example via a trial - before a scheme is permanently introduced.

Dr Schuitema, who will discuss the results of her study at the 5th International Symposium on Travel Demand Management which takes place at the University next week, said: “Congestion charging is regarded by economists as one of the most effective ways to influence driving behaviour, however, resistance from the public is usually very high.

“The study’s findings show that support increases significantly if people become more convinced of the positive benefits for themselves or for society, as they are more prepared to adapt, on the condition that it is to their advantage.”

In Stockholm the introduction of a congestion charge in 2007 was preceded by a seven month trial period.

Dr Schuitema said: “This lead in time allowed people to experience the effect the pricing policy had, on them as a road user and also on wider society.

“On average, the positive effects were greater than people predicted. Sixty two percent of people participating in the study said that congestion had decreased more afterwards than they had expected, 52% said pollution levels went down more than anticipated and 45% reported they thought parking problems had reduced more than they had envisaged.

“With respect to the costs of congestion charging, 48% of the respondents in the study said they had overestimated the costs of the charge before the introduction of the trial.

When a referendum took place following the trial period a majority of inhabitants of Stockholm city voted in favour of congestion charging.

Dr Schuitema said: “These findings indicate that the public are far more likely to embrace this change if they have first-hand experience of it in advance.

“This logic could be applied to the circumstances in Edinburgh in 2005 and Manchester in 2008, where there was no trial period before congestion charging was put up for vote in  public referendums. Over 70% of people in both cities voted against its introduction.”

The study also highlighted the importance of choosing the correct location to trial congestion charging to ensure a positive public reaction.

Dr Schuitema said: ‘If a practical test does not show positive effect that will probably result in a negative effect on acceptance. So it is important to hold the trial in a location where you are sure that the effects will be positive - the chances of success are therefore higher in a place with relatively major traffic problems.”

Dr Schuitema sees similarities with the congestion charge in London, which was introduced in 2003. She said: ‘When the policy was first introduced in London, there was a great deal of public resistance but after a year the number of supporters had increased dramatically.

“People could see with their own eyes that the pricing policy was having an effect. Even when the pricing of the charge was increased after a few years, there was no negative effect on the scheme’s acceptance.

“Importantly my findings show that support is not created by rationalising away the negative effects but by emphasising the positive effects.

“So, for example, it’s important not to emphasise that the costs for car users are not nearly as high as people think, but to highlight instead the potential advantages such as a reduction in traffic jams, and the knock on positive economic effects of this.”

Dr Schuitema will outline the results of her study at the 5th International Symposium on Travel Demand Management, hosted by the University of Aberdeen from October 26 – 28.

Around 80 leading transport experts, consultants and service providers from across the globe will convene for the event which will highlight the latest research and developments across the transport sector.