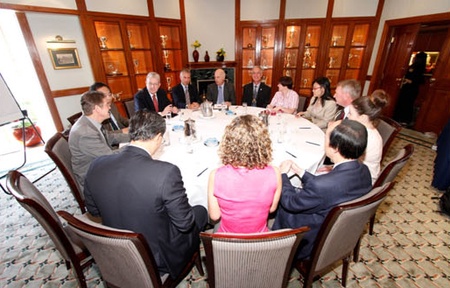 The University of Aberdeen’s pioneering project of curriculum reform was showcased at an event in Hong Kong yesterday as the country introduces educational reforms which will produce four year degrees similar to those in Scotland.

One of the University’s Vice Principals, Bryan MacGregor, attended a roundtable event with the Cabinet Secretary for Education and Lifelong Learning, Michael Russell, at the University of Hong Kong.

The two institutions are widely recognised as leading the way in overhauling the curriculum for undergraduates to better meet the needs of employers.

Between October 2007 and October 2008, the University of Aberdeen undertook a review of its education objectives, programme structures and curriculum content, with a view to developing a high quality, distinctive and attractive educational experience which took account of developing international approaches.

Aberdeen was the first University in Britain to undertake the process and it has been the most important educational development at the University of Aberdeen in decades.

The changes, which came into place in September 2010, have broadened the study options available to students and substantially increased enrolments on language courses such as Arabic, French, Gaelic, German, Mandarin Chinese and Spanish.

It is embedded in broadly-based Scottish education philosophy but aligned to best practice internationally and the University has worked closely with the University of Hong Kong as a fellow pioneer of reform.

Hong Kong has radically overhauled its own education system, to produce a system similar to Scotland's.  Students will now spend six years in school studying a wide range of subjects, leading on to a four-year degree with broadly based study in the first year.

The benefits of the four-year degree system were outlined by the Cabinet Secretary at last week’s Holyrood debate on Higher Education.

“The benefits of the curriculum reform which the University of Aberdeen pioneered have resonated far beyond its own student population and faculty staff. The university took an innovative approach to looking at the economic and business needs of Scotland and beyond then tailored its curriculum accordingly. The long-term outcome will be graduates equipped with the right skills, knowledge and expertise to shape a sustainable and successful workforce for Scotland.

“The University of Hong Kong has taken a similar approach and both institutions are now recognised as leaders in curriculum reform. This work from the University of Aberdeen is hugely significant for Scotland’s global reputation in education as well as our efforts to grow the economy – at home and abroad.”

Professor MacGregor said: “The universities of Aberdeen and Hong Kong are held up internationally as two of the best examples of innovative curriculum reform.

“Curriculum reform is about ensuring our graduates are equipped for the challenges of the 21st Century and are better able to meet the needs of employers and society.

“They form part of a wider plan to achieve status as one of the top 100 universities of the world. Sharing our experience with colleagues from other distinguished institutions, at such a prestigious event, can only help to drive that forward.”