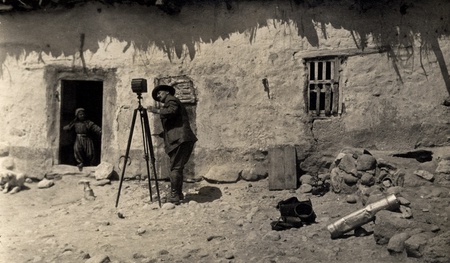 What drove generations of Aberdeen academics, two of them from the same tiny Moray parish, to embark on daring explorations of Asia Minor both before and after the First World War?

This subject will be explored in a series of free public lectures getting underway on October 19 and running until November 4 at the University of Aberdeen.

The 2010 Geddes-Harrower lectures will focus on the notebooks and photographs from William Moir Calder’s extraordinary travels through Asia Minor from 1908 to 1960, held in the University’s archives.

Calder, who came from Edinkillie, originally travelled with the Scottish archaeologist William Mitchell Ramsay, an Aberdeen scholar who first travelled to Asia Minor in the 1880, and regularly thereafter for the following 40 years. Ramsay also inspired John Anderson, son of the minister of Edinkillie, to explore the region from the 1890s onwards.

Calder travelled with the American archaeologist William Buckler and their work will be explored in the public lectures by Buckler's granddaughter, Professor Charlotte Roueché.

A Professor of Late Antique and Byzantine Studies at King’s College London, she is the current Geddes-Harrower chair of Greek Art and Archaeology at the University of Aberdeen.

The position was established in 1960 with funds bequeathed by John Harrow, Regius Professor of Greek from 1886 to 1931, whose wish it was that the Chair should commemorate not only himself but also his predecessor in the Chair, Sir William Geddes, later Principal of the University.

For Professor Roueché, the lectures present the chance to share findings which relate to her own family history as well as her professional research, and which she hopes may yield further clues as to what drove the spirit of adventure at Aberdeen.

She said: “The great Aberdeen pioneer was William Ramsay, who began to travel to Asia Minor in the late 1870s but the idea of travelling to the region and recording things became a strong Aberdonian tradition.

“They used horses and carts to get around and it must have been a major undertaking with all that equipment. Through their travels they gained a sense of the culture of these very provincial areas, as well as photographing and recording archaeological finds.

“There would have been few people undertaking this kind of work at the time so I am interested to know how so many Aberdeen academics, including two from rural Moray, came to have such a spirit of adventure and exploration.”

Professor Roueché, who is dedicating her stay in Aberdeen to scouring the University archives to piece together their travels, is keen to find out more about the Calder family and its links to Edinkillie.

The lecture series, entitled 'From Aberdeen to Ankara: tracing scholarly adventures', gets underway on Tuesday October 19 at 6.30pm in the King’s College Conference Centre, University of Aberdeen and is open to all.

To reserve a free place online at www.abdn.ac.uk/geddes-harrower/index.phpor by calling 01224 272084 or emailing w.gibb@abdn.ac.uk