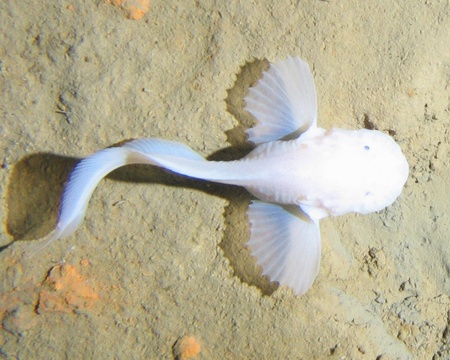 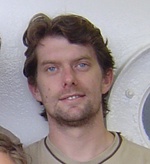 Scientists investigating in one of the world’s deepest ocean trenches – previously thought to be void of fish - have discovered an entirely new species.

The findings by a team of marine biologists from Aberdeen, Tokyo and New Zealand, have shed new light on life in the deepest places on Earth and the global distribution of fish in our oceans.

The expedition to the Peru-Chile trench in the South East Pacific Ocean revealed a new species of snailfish living at 7000m, never before caught or captured on camera.

Mass groupings of cusk-eels and large crustacean scavengers were also discovered living at these depths for the first time.

During the 3 week expedition on the research vessel Sonne, the team of scientists employed state-of-the-art deep-sea imaging technology, including an ultra-deep free-falling baited camera system, to take a total of 6000 images between 4500 and 8000 metres deep within the trench.

The expedition is the seventh to take place as part of HADEEP – a collaborative research project between the University of Aberdeen’s Oceanlab and the University of Tokyo’s Ocean Research Institute, with support from New Zealand’s National Institute of Water and Atmospheric research institute (NIWA).

The HADEEP team has been investigating extreme depths across the globe for 3 years. Their findings to date have included capturing the world’s deepest fish on camera for the first time.

These latest discoveries provide a new insight into the depths at which fish survive and the diversity of populations which could exist in the deepest points of oceans across the globe.

Dr Alan Jamieson from the University of Aberdeen’s Oceanlab, who led the expedition said: “Our findings, which revealed diverse and abundant species at depths previously thought to be void of fish, will prompt a rethink into marine populations at extreme depths.

“To test whether these species would be found in all trenches, we repeated our experiments on the other side of the Pacific Ocean off Peru and Chile, some 6000 miles from our last observations.

“What we found was that indeed there was another unique species of snailfish living at 7000m – entirely new to science, which had never been caught or seen before.

“A species of cusk-eel - known as Ophidiids - also gathered at our camera and began a feeding frenzy that lasted 22 hours - the entire duration of the deployment.

“Further research needs to be conducted to decipher whether this is also an entirely new species of cusk-eel that we have discovered.

“Our investigations also revealed a species of crustacean scavengers - known as amphipods - which we previously did not know existed at these depths in such great numbers.

“These are large shrimp-like creatures of which one particular group, called Eurythenes, were generally far larger and occurred much deeper in this trench than has ever been found before.”

Dr Niamh Kilgallen, an amphipod expert from NIWA said:”The sheer abundance of these big amphipods was overwhelming, particularly at 7000 and 8000m, which is much deeper than they have been found in any other trench. It begs the question of why and how they can live so deep in this trench but not in any other.”

Dr Toyonobu Fujii, a deep-sea fish expert from the University of Aberdeen said “How deep fish can live has long been an intriguing question and the results from this expedition has provided deeper insight into our understanding of the global distribution of fish in the oceans.”

Dr Jamieson added: “These findings prompt a re-evaluation of the diversity and abundance of life at extreme depths. Furthermore, it is now apparent that each of the deep trenches across the globe hosts a unique assembly of animals which can differ greatly from trench to trench.  The immense isolation of each trench draws parallels with island evolution theory popularised by Darwin’s finches.”

The HADEEP project is funded by the Nippon Foundation, Japan, and NERC, UK.