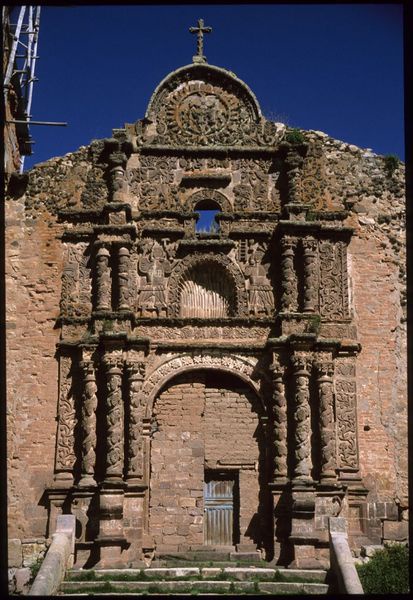 An Aberdeen academic who travelled thousands of miles through some of South America’s most isolated areas and trawled through archives stored in bin liners has seen his work come to fruition with the publication of a new book.

Gauvin Bailey, professor of Renaissance and Baroque Art, King’s College at the University of Aberdeen, has written the first comprehensive study of the architecture and architectural sculpture of Southern Peru in the late colonial period (1660s-1820s).

The Andean Hybrid Baroque draws on hundreds of primary documents and ethno-historical and anthropological literature and provides the most substantial study of colonial Peruvian architecture in decades.

He now hopes that by drawing attention to some of the ‘architectural treasures’ of the region, they may be better protected for future generations.

Professor Bailey, who lives in Pitcaple, near Chapel of Garioch, has spent six years travelling to sites in Peru, Bolivia and Argentina to track down examples of the coming together of European and Inca symbolism and style in churches and other symbols of worship.

His research has taken him to some of South America’s most remote and inaccessible places, often on only a hunch that he would find what he was looking for upon arrival.

Professor Bailey said: “I have invested a huge amount of time and effort in compiling the book but it has been well worth it.

“I did wonder at times on my travels whether I might be on a wild-goose-chase. At one stage I found myself at the Cotahuasi Canyon in Peru, which is twice as deep as the Grand Canyon and very hard to get to.

“It was just a guess that there would be colonial churches in the area but low and behold I found some great examples. Through my research I have uncovered architectural treasures, pictures of which have not previously been published.”

Access to archives and also proved difficult. Professor Bailey added: “I was hunting down mostly parish archives and until you reach the village you have no idea what is there or where it might be stored.

“Quite often I found brown garbage bags to be the chosen method of organising archive material so my research was very time consuming but on the whole I managed to track down what I was looking for.

“It has been fascinating to meet the people living in these towns and to discover the significance the churches have to their communities.

“I hope that the book will now bring these churches to the attention of the public as for the most part they are not protected so getting interest in them is important.”

The Andean Hybrid Baroque will be released on October 15 and is published by the University of Notre Dame Press. For further details visit http://undpress.nd.edu/book/P01392

It will be officially launched at the Peruvian Embassy in London on November 11.