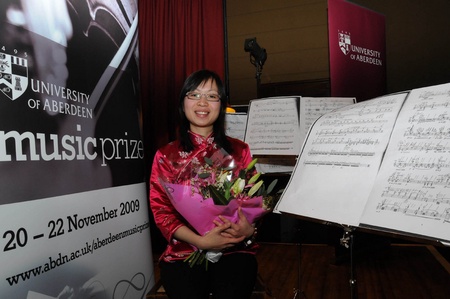 A worldwide search for 21st century compositional talent will begin this Friday (November 26) with the call for scores for the 2011 University of Aberdeen Music Prize.

The Aberdeen Music Prize is a unique, biennial competition for aspiring new contemporary composers from around the globe.

Established in 2005, it represents a unique collaboration between the University of Aberdeen and the BBC Scottish Symphony Orchestra (BBC SSO), and will be judged by the world-renowned composer Julian Anderson.

Hundreds of scores from 36 different countries were submitted for the 2009 prize, with May Kay Yau, from Hong Kong, eventually coming out on top.

She was awarded £5,000 in the form of a commission to write a full piece for orchestra, and her work entitled Demise of the Cherry Blossomswill be premiered by the BBC SSO at Aberdeen Music Hall this Friday (November 26), and will be recorded for future broadcast on BBC Radio 3.

The event will also see the launch of the global call for scores for the 2011 prize. Five works will be selected from the entries by a panel of experts and the composers brought to Aberdeen from November 4 to 6, 2011, for a series of workshops, with the distinguished composer Julian Anderson and members of the BBC SSO.

Under the patronage of Dame Evelyn Glennie, the University of Aberdeen Music Prize competition forms the centrepiece of a wider celebration of contemporary musical creativity in the form of a weekend of hands-on events, workshops and concerts in Aberdeen, linking up with the popular sound festival of new music.

Dr Paul Mealor, Reader in Composition and Director of the University of Aberdeen Music Prize said: "Since it was first launched, this search for creative talent has helped to develop Aberdeen's role as one of the major cultural centres in the UK. Hundreds of composers from every corner of the globe embraced the 2009 competition, many of whom wrote to us to express their gratitude that such an event exists.

"We are also honoured to have such a well respected judge in Julian Anderson, and in the BBC SSO we have a body of musicians that understand the techniques of modern music better than anyone. We're delighted to be able to open the call for scores for the 2011 competition."

Professor Pete Stollery, Acting Head of the School of Education said, "It's a real coup to have the Music Prize taking place at the same time as the sound festival in 2011. These two events are now firmly established in the new music calendar and the University is proud to be a big part of both of them."

Gavin Reid, Director of the BBC Scottish Symphony Orchestra, said: "The BBC SSO has an international reputation for promoting new music and developing the work of young composers, and so we're delighted to continue our partnership with the University of Aberdeen Music Prize."

May Kay Yau will have her commission, Demise of the Cherry Blossoms, premiered by the BBC SSO, under the baton of Vassily Sinaiskyat Aberdeen Music Hall on Friday, November 26 at 7.30pm. The concert will also include Britten’s Piano Concerto and Vaughan Williams’ 5th Symphony.

The University of Aberdeen Music Prize is open to composers of any nationality, with no age limit or restrictions. Closing date for applications is Friday May 27, 2011.

May Kay Yau, Hong Kong, entered the Hong Kong Academy of Performing Arts to study at the age of 17. There she was the winner of the Concerto Trial and had her first orchestral piece presented in the concert of the 5th Anniversary of the Establishment of Hong Kong Special Administrative Region. Following that she was awarded a scholarship to pursue a masters degree at the Royal Academy of Music in London with Paul Patterson. Her compositions have been performed in various music festivals in China, Hong Kong, Japan, Korea, Israel, Portugal, Greece and UK. She has also collaborated with the London Sinfonietta, the BBC Singers, National Theatre, RAM Harp Ensemble, and the Gemini Ensemble. She is the composer-in residence with the Wuji Ensemble. May Kay is currently a third year PhD student at the University of Bristol, funded by the ORS and the University Research Studentship.