Major award nomination for ‘How was school today?’ project
07 October 2010 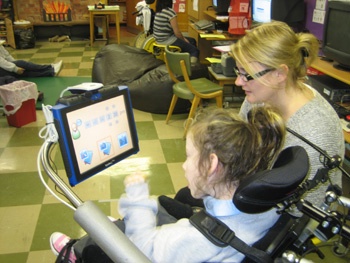 A groundbreaking computing project to help profoundly disabled children communicate more effectively, developed by researchers at the Universities of Aberdeen and Dundee, has been nominated for a major industry award.

The How was School today...? software uses a combination of technologies to enable children with disabilities such as cerebral palsy and learning difficulties to have conversations in a faster, more interactive way.

In the latest in a series of accolades for the project, it has been nominated in the “Community Project of the Year” category of the BCS UK IT Industry Awards 2010.

The awards are a platform for the entire computing and IT industry to celebrate best practice, innovation and excellence across a number of fields.

The How was School today...? technology, the first of its kind in the world, uses sensors to track the pupils as they move around the school – gathering data and information about their experiences. It then automatically generates an interactive narrative the pupils can edit and embellish to describe what they did at school.

Pupils can then tell these stories to their parents or carer when they return home at the end of the day, giving them the opportunity to share information in a more natural way.

Rolf Black, from the University of Dundee's School of Computing, said everyone was delighted with the nomination.

“This is fantastic news for everyone involved,” he said.  “In Dundee it is very important to us to have everyone on board when looking into new ideas, especially when it comes to users with special needs.

“Teachers, therapists and other school staff as well as parents and most importantly their children all worked together when we developed this new approach – a true community project!” he said.

“There is a real shift in using computing technologies to enable non-speaking individuals to share personal stories. And this nomination recognises that Dundee and Aberdeen are right at the forefront of this development.”

Dr Ehud Reiter, from the University of Aberdeen's School of Natural and Computing Sciences, said, “The success of the How was School today...? technology depends on strong collaboration.

“The aim of the device is to allow children with communication difficulties to share their experiences in a more natural and independent way. In order to make the technology simple and effective for children to use it’s essential we get not only their feedback and input into how the system should work but also take advice from parents and teachers who will be involved in using the technology.

“This nomination reflects the successful partnerships we have developed since the project commenced.”

In selecting nominees, the judges considered a number of criteria including innovation, return on investment, quality of management, and impact.  The team behind How was School today...? will find out whether they have been successful at the BCS UK IT Industry Awards 2010 ceremony at Battersea Park Events Arena, London, on Thursday November 11.

The project has already won awards and been held up as an exemplar of how technology can be used to enhance the lives of disabled people.

Pupils from a special school run by the research collaborator Capability Scotland helped pilot the software.  In June, the school won a Times Education Supplement (TES) Award in the Outstanding ICT Learning Initiative of the Year category for its involvement in the project.

David Clarke, Chief Executive Officer, BCS, The Chartered Institute for IT, said, “Congratulations to all the finalists. They can be proud of their achievements. Their projects and work showcase the professionalism that exists among IT professionals and also highlights the value of IT today and the way it touches so many areas of society.”

Robin Booth, Publishing Director of Computing, added, “I would like to add my congratulations to the finalists. The UK IT Industry Awards are rigorously judged and to be announced as a finalist is a great achievement. I don’t envy the judges who now have to decide the winners; it’s going to be very tough.”

The How was School today...? project received additional funding of £285,000 from the Engineering and Physical Sciences Research Council earlier this year, to develop the devices further.

The Aberdeen and Dundee researchers are aiming to support children with a wider range of difficulties, using more compact forms of the equipment such as mobile phone technology.

How was School today...?

A child using the How was School today...? system can create a story describing what they did during their day, and then use the technology to tell it to a parent or guardian. The system involves sensors that track and record where a child is going within their school day.

Swipe cards are then used by the teachers or carers who interact with the child to tell the system who the child has met and what activity they have been involved in. A recording device is also incorporated in the system, which allows people who come into contact with the child to record more detailed information about the events which have taken place within the youngster’s day.

The sensor data is used to generate simple sentences using natural language generation techniques which summarise events during the day.

Natural language generation (NLG) is used to convert the sensor data into English, e.g. if the sensor data places the child in the hall at 1.30pm, the system would generate a sentence such as 'After lunch I went to the hall'. NLG also allows the system to generate appropriate comments, e.g. if the child came into contact with a person called Anne who swiped her card to register her presence, the system might generate: 'Anne was there.' If the child then chooses to add a positive comment by pressing a smiley face, the system would automatically generate 'she is nice', because it knows that Anne is female.

A long term aim of  How was School today...? is to explore how the technology could be integrated into the communication devices used by children with communication impairments.