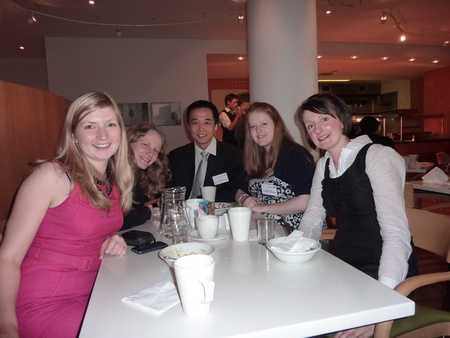 A revolutionary concept, which would have the potential to help alleviate diseases including osteoporosis, has been dreamt up by a group of Aberdeen scholars.

When we drink tea, coffee or hot chocolate we absorb compounds called oxalates, found naturally in the plants from which these drinks are derived.

People with a history of osteoporosis or kidney stones are advised to avoid high levels of oxalates in their diet.

Oxalates bind calcium ions in the stomach, forming calcium-oxalate crystals, which prevent calcium from being absorbed into the body – a cause of osteoporosis.

If these crystals build up over time, this can lead to the development of kidney stones.

A group of University of Aberdeen postgraduate research students have developed the concept for a system which would filter out these compounds from beverages before they are consumed.

Their unique hypothetical invention has secured them a place in the finals of an annual UK-wide “Dragon’s Den” style competition, which challenges students to conceptualise scientific innovations.

Lesley Ford-Taylor, a postgraduate researcher in the University’s School of Medical Sciences is one of the team of 5 students – known as DeeNature - who developed the concept.

She said: “Oxalates are compounds which occur naturally in plants, where they act as a defence mechanism to help prevent them from being eaten by bugs.

“Whilst useful for plants, oxalates can be harmful for people with a history of osteoporosis or kidney stones, when ingested via drinks such as tea, coffee and hot chocolate.

“The device we have conceptualised is a filter which would sift out the oxalates from these drinks.

“The filter would use a molecule called a polymer, which has ‘sticky’ properties which would prevent oxalates from escaping into the drink.

“The filter could either be integrated into the actual design of a teabag or a coffee filter, or as a sift style device which could be used be an individual before they drink their beverage.”

DeeNature’s concept won the Scottish heat of the annual Biotechnology Young Entrepreneurs Scheme (YES) competition – which aims to raise awareness of the commercialisation of bioscience ideas among the postgraduate student community across the UK.

They will compete in the UK finals of the competition in London on December 13, where winning entries will receive a £1000 cash prize.

Dr Lauren Whyte, who is also a postgraduate researcher in the University’s School of Medical Sciences and part of the DeeNature team said: “In the Scottish heats of the competition we had to pitch the business plan for our product to a panel – in the style of “Dragon’s Den” - comprising of business, financial and academic representatives who took on the role of venture capitalists.

“As a team we found the experience incredibly enriching, gaining business knowledge, and learning how to work collaboratively. Winning the Scottish heats was testament to the hard work, and late nights we put into our entry.

“We are looking forward to the London finals and hope that our success so far in the competition will encourage more students from The University of Aberdeen to compete in next year’s competition.”

Three of the team members work with Professor Ruth Ross, Chair in Molecular Pharmacology at the University.

Professor Ross said: ‘This competition is a fantastic opportunity for students to develop an entrepreneurial spirit early in their careers. They are the next generation of talented innovators who will make an impact on health and society through exciting science. I’m really delighted with their achievement.”

For more information on the Biotechnology YES competition visit: www.biotechnologyyes.co.uk/