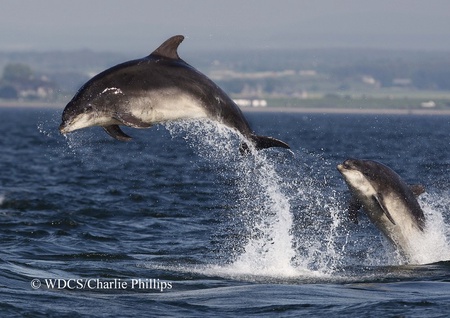 The income from tourism spending in Scotland due to the presence of the east coast bottlenose dolphin population is at least £4 million, according to a new survey report published today by the Moray Firth Partnership.

The report findings show that more than 200 jobs are generated in the tourism sector due to overnight trips undertaken by tourists to see the dolphins. Dolphin watching was a significant reason to visit for 52,200 overnight visitors to the east coast, and 17,100 of these visitors considered seeing dolphins to be the main reason for their trip.

The new report, ‘The Value of Tourism Expenditure related to the East Coast of Scotland Bottlenose Dolphin Population’, is formally launched today by Richard Lochhead, Cabinet Secretary for Rural Affairs and the Environment.

Mr Lochhead said: “Dolphins are much loved inhabitants of Scotland’s eastern waters and it is little wonder that many thousands of people plan especially to see them. But beyond their charm, they are also a very visible symbol of a healthy and sustainable marine environment.

“The Marine Scotland Act has been created to protect our wild species – like dolphins – while we also ensure that Scotland continues to benefit from the riches contained within our waters. The interests are many and diverse, but conscientious stewardship of this vast natural resource can only enrich us as a nation.

“While dolphins directly add to our tourist income, they are also a delightful symbol of this unique and special environment which we protect, develop and enjoy.”

The report findings are based on a survey of 529 visitors in east coast locations in 2009, and carried out by University of Aberdeen researchers based at the Aberdeen Centre for Environmental Sustainability (ACES). The bulk of dolphin visitors are concentrated on locations around the Moray Firth, but tourist journeys cover areas throughout Scotland. In the summer the majority of dolphin visitors are from outside Scotland, but Scottish visitors come more frequently for shorter dolphin viewing breaks at other times in the year.

This report complements the findings of the Scottish Government’s recent research report, 'The Economic Impact of Wildlife Tourism in Scotland' issued in June. This shows the net economic impact of all wildlife tourism in Scotland is around £65 million, supporting around 2,760 jobs. Around £15 million of this is estimated to relate to marine wildlife tourism, and a further £24 million to coastal tourism including shore-based watching activities. This highlights the importance of coastal and marine tourism to Scotland, and the significance of bottlenose dolphins to both these sectors.

East coast authorities and other key stakeholders involved in the report are meeting to consider the findings and to consider opportunities for developing joint initiatives across the range of the dolphin population, to help protect the bottlenose dolphins from disturbance, enhance the environment and benefit local communities and visitors. Whale and dolphin watching directly provides around 13,000 jobs around the world, and has been recognised as one of the most effective ways to benefit from the presence of marine mammals in a non-destructive way.

Copies of the report may be downloaded from the Moray Firth Partnership and other partner websites. See http://www.morayfirth-partnership.org/ or telephone 01463 225530 for more information.

2) Executive Summary from Main Report - appended - embargoed until 2.30 pm. Monday 04 October 2010. The main report will be made freely available to the public via the Moray Firth Partnership and other partner websites after the launch.

Three images have been made available for free use at high resolution for printing. Please email info@morayfirth-partnership.org or telephone 01463 225530 to obtain copies.

ACES is a joint research centre combining expertise from the University of Aberdeen and the Macaulay Institute.

In a European context, bottlenose dolphins are considered rare and are therefore listed under Annex II of the Habitats Directive as a species whose conservation requires the designation of Special Areas of Conservation (SAC). Accordingly, a large part of the inner Moray Firth was designated by the European Commission as a marine SAC in October 1996.

The “Moray Firth” bottlenose dolphin population is now known to have an extensive range around the coast as far as England. All relevant authorities around the east coast should therefore be alerted to the likely increased presence of bottlenose dolphins, given the implications of this legislation in terms of the protection to be provided.

The following organisations were key contributors to the development of the Bottlenose Dolphin Economic study.

E3. Overnight visitors with an interest in the bottlenose dolphins spend on average £413 per trip and stay in Scotland for 9.5 days. Around 64% of these visitors visit only the east coast to see dolphins, and spend £325 on an 8 day visit; whilst 36% of visitors visit both east and west coasts and spend £565 on a 12.5 day visit. More than 80% of visitors have occupations typically classified as professional, administrative and managerial (ABC1). The majority of visitors (55%) come in the peak summer months (June, July and August) with the remainder (45%) in the shoulder months (principally April, May, September and October).

E4. The majority of visitors in the peak season are from the UK outside Scotland (69%), but Scottish visitors are more highly represented in the off-peak period (38%). Overseas visitors comprise a relatively small segment (15%) of visitors, and are slightly less likely to be interested in dolphins than UK visitors. On average visitors in the peak season are more represented by families with children staying for 7 or 14 day visits, whilst off-peak visitors tend to be slightly older and are more likely to stay for short breaks rather than main holidays.

E5. Overall 70% of visitors staying for at least one week and having dolphins as the main reason for their visit succeeded in seeing dolphins by the end of their trip. 85% of all visitors to dolphin-oriented locations would recommend the area to others, and 79% of visitors for whom dolphins were at least important in their decision to visit thought they would try to visit again in the future. In total 23% of visitors were staying extra nights on the east coast to try to see dolphins, and 17% of visitors with an interest in dolphins took a marine wildlife boat trip during their visit.

E6. It is evident that the economic importance of the bottlenose dolphin population to Scotland’s tourism economy is due to creating a holiday destination focal point, with subsequent spending by a significant number (52,200) of overnight visitors. Sustainable management around the dolphin population should try to ensure that businesses opportunities reliant on boat trips are sensitively developed to prevent potential disturbance to the population, whilst encouraging initiatives related to land-based observation and information activities promoting dolphins around the geographical range of the population.