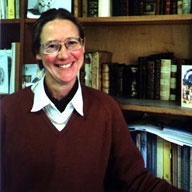 After four decades at the University of Aberdeen, Professor Alison Saunders has seen huge changes in the institution.

She retires today (September 30) almost 40 years to the day since she began her time in the Department of French.

The University of Aberdeen had just 5,000 students when she began her academic career in 1970 and the oil industry was yet to transform the city into Europe’s energy capital.

Professor Saunders, whose research interest is in 16th and 17th century French literature, particularly in the field of poetry, word and image, admits Aberdeen was a strange choice for someone needing to spend time working in the libraries of Paris.

“When I came up to Aberdeen I certainly did not really mean to stay here for any length of time,” she said.

“All my connections were in the south, and on the face of it, it was a bit daft basing myself in a university which was the furthest removed from the country I was interested in.

“And in the event the research thing was not a problem at all because the growth of Dyce made it very easy and quick to get to Paris.”

Professor Saunders, who was appointed to a personal chair in French in 1990 and then as the Carnegie Chair in 2003, has witnessed huge changes in Old Aberdeen as well as the University as it has grown.

“When I started much of Old Aberdeen was pretty scruffy with lots of rusty corrugated iron fences around decayed buildings, particularly up the Spital. Firhill Place, for example, which looks so nice now, was a total slum, as were many other buildings that the university gradually bought up and restored.”

She also recounts that with female lecturers much less common, she was invited to a meeting of the ‘Ladies Club’ upon her appointment.

“Almost the first thing I was invited to was a meeting of the ‘Ladies Club’, run by the then Principal’s wife, Phyllis Wright,” she added.

“Which was fine, but there was a slight awkwardness when we arrived because of name badges. Mrs Professor Diverres, Mrs Dr Brown and so on so they did not know what to do for a Miss Saunders!

“Things are very different now but I feel honoured to have been at the University for four decades and my time here has been very different, very interesting and above all great fun.”

Professor Saunders, who will remain in Old Aberdeen, will now dedicate more time to her own research.