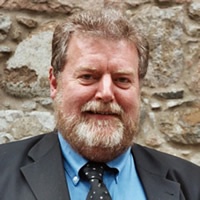 A University of Aberdeen professor will today see nine years of work come to fruition with the publication of an unprecedentedly comprehensive compilation of poetry from Ireland.

The Penguin Book of Irish Poetry, edited by Professor Patrick Crotty, Head of the School of Language and Literature at the University of Aberdeen, will be published today (September 30).

The book offers a rich and varied diet of poems in English from the 14th century to the present, alongside the most exhaustive account yet attempted in English translation of the far older and still vibrant tradition of poetry in Gaelic.

Eighty of the 200 or so verse translations are new, and include specially commissioned work by poets such as Seamus Heaney, Kathleen Jamie, Bernard O’Donoghue, Maurice Riordan and David Wheatley

The volume recounts a millennium and a half of Irish history through the art of the country’s greatest poets and songwriters.

The many ethnicities of Ireland are heard, whether by way of poetic reflections on the island’s culture and politics from the Old Norse of the Vikings, the Old French of the Normans or the Middle English of their more lowborn followers.

The Ulster Presbyterian tradition is represented by poems in Scots drawn from across three centuries, and Old Irish lyric poetry is made available through a range of translations, many of them new.

At the heart of the book lie the courtly strict metre poems that dominated Gaelic culture from the 13th to the 17th centuries, while the achievement of the 18th and 19th centuries is more fully represented than ever before and the resurgence of verse making in Ireland since the 1960s given its due in a large but eclectic section near the end of the volume.

The Penguin Book of Irish Poetry, which has a Preface by the Nobel laureate Seamus Heaney, was launched yesterday (September 29) at the Royal Irish Academy in Dublin.

Professor Crotty said: “Ireland has one of Europe’s most wealthy and diverse poetic traditions. It is a very large book, running to 1,120 pages which took nine years to compile and significantly expands the canon of Irish poetry.

“It includes new translations by distinguished poets, among them Seamus Heaney, Michael Longley and Scotland's Kathleen Jamie as well as almost 60 of my own translations from Old, Middle, Classical and Modern Irish, Old Norse, Olde French, Latin and Middle English.”