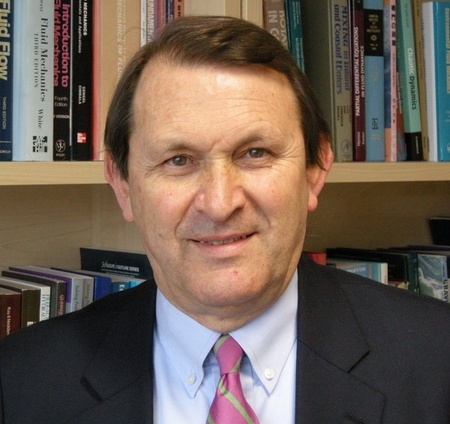 Powerful waves capable of destroying underwater vehicles, tilting offshore rigs and halting a ship at full power, will be the subject of the first in a new series of lectures hosted by the University of Aberdeen.

Professor of Fluid Dynamics at the University of Dundee, Peter Davies, will discuss so-called ‘internal waves’ which can exist deep within the ocean despite the appearance of calm surface conditions, on Wednesday (October 6) at the University’s King’s College Conference Centre.

The event – which is free to attend and begins at 6pm – is the inaugural lecture in the new RV Jones Lecture series.

Developed by the University of Aberdeen’s School of Engineering, the series commemorates Reginald Victor Jones, one of the institution’s most distinguished Professors in Applied Physics, who played a key role in the defence of Britain during World War II.

Professor Davies’ lecture will focus in particular on internal solitary waves, which have enormous amplitudes and are able to travel vast distances across the ocean without change in shape or velocity.

The results of a number of research investigations into the behaviour of internal solitary waves, and the limitations of existing theoretical descriptions will also be examined, alongside future modelling approaches to predicting internal solitary wave properties and consequences in oceanic conditions.

Professor Davies said: “Observations on the sea surface can often be misleading – even with flat, calm conditions and no wind blowing, enormous waves can still exist deep within the ocean.

“These so-called ‘internal waves’ were first observed by Benjamin Franklin in an oil lamp when travelling between Europe and America in 1762 but sailors and oceanographers had experienced for centuries the effects of such waves in coastal waters through the “dead water” phenomenon where, even at full power, a ship is unable to make forward progress because of internal wave generation.

“My lecture will focus on internal solitary waves in particular; these are generated by a combination of tidal action and irregular sea floor bottom topography and have been observed with amplitudes as large as 100 – 120 m in total water depths of 500 m.

“This wave has sufficient energy to exert significant forces on any obstacles that are in the way.  There is evidence from South East Asian waters of offshore rigs being tilted by more than 3 degrees during an internal wave event, whilst the loss of the USS Thresher in 1969 has been attributed to the action of internal waves in forcing the immobilised submarine to below its crush depth.

“In my lecture I will present the results of a number of modelling investigations into the behaviour of internal solitary waves and show how these studies have the potential to predict important consequences of the waves in oceanic conditions.”

Professor Davies lecture, What lies beneath?, will take place on Wednesday October 6 at 6pm in the University of Aberdeen’s King’s College Conference Centre, and will be followed by refreshments.

Booking is essential for the event. To book your free place visit http://www.abdn.ac.uk/events/details-8465.php

Professor Davies was appointed to a Personal Chair in Fluid Dynamics at the University of Dundee in 1995, the same year that he was elected a Fellow of the Royal Society of Edinburgh.

His work in the fields of physical, environmental and geophysical fluid dynamics, which spans almost 40 years, was recognised this year through his election in 2010 as a Foreign Member of the Norwegian Academy of Science and Letters.

Professor RV Jones was a renowned physicist who played a key role in the defence of Britain during World War II and is often referred to as 'the father of electronic warfare'.

Professor Jones was born in London and studied physics at Oxford, gaining a first-class honours in physics and a Doctor of Philosophy. During the Second World War, he worked as a scientific advisor for British Intelligence and Winston Churchill. Churchill is reported to have said 'he did more to save us from disaster than many who are glittering with trinkets'.  He was appointed science officer for the Air Ministry and served as Assistant Director of Intelligence from 1941-1946.

At the end of the war, Jones’ former colleague from the Air Ministry, Edward Wright (1906-2005), returned to the University of Aberdeen as Professor of Mathematics (and later Principal). He recommended Jones to apply for a post in the Natural Philosophy department. Although Jones was inexperienced in teaching, he was offered the post and became Professor of Natural Philosophy. He went on to enjoy a career of over thirty years as a gifted educator who was passionate about teaching and scientific history. He received many honours and continued in international and advisory work beyond his formal retirement in 1981.