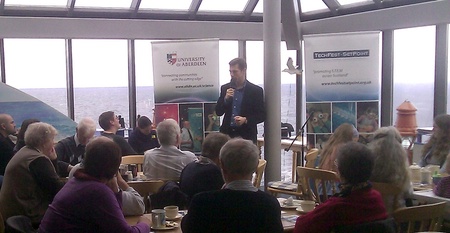 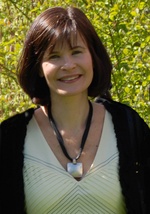 Café Light aims to provide a relaxed forum for the discussion of science and technology over lunchtime, at the Museum of Scottish Lighthouses in Fraserburgh.

While Café Controversial allows the opportunity to explore and debate contentious issues in science at Satrosphere Science Centre.

Both series of events launched yesterday to full to capacity audiences.

Dr Douglas Mair from the University’s Department of Geography and Environment opened the Café Light series with his talk which gave an insight into his 17 year career working on glaciers in the Alps, Arctic Canada, and Greenland.

He discussed evidence he has gathered in his career for the impact of climate change on ice sheets and rising sea levels, and revealed unique research methods used by scientists to study the effects of climate change.

Professor Ruth Ross, a pharmacologist at the University of Aberdeen discussed the dual aspects of cannabis - its medical potential and its detrimental effects caused by recreational use – in the first of the new Café Controversial series.

“In Fraserburgh we hosted a more personalised event whereby Dr Mair followed his introductory talk with a discussion to small groups and individual visitors.

“At Satrosphere, Cafe Controversial presented by Professor Ruth Ross followed the more traditional cafe science format with a short talk followed by an audience discussion. We were delighted with the audience response and hope this series will highlight the role of science in some of today’s most topical areas but also the boundaries that exist between the scientific process and societal, ethical and political issues.”

“Other issues set to be covered in the Café Controversial series include the future of nuclear power, the debate surrounding gender selection, whilst Café Light will look at topics including why fishermen have the healthiest bones, and the physics behind Scotland’s coastline.”

By the end of this year the University and its partners will have hosted 30 cafe science sessions, nine of them in Aberdeenshire, reaching an audience of almost 3000 people and many more through related media coverage.

Dr Skeldon added “The north east of Scotland now has the most diverse and expansive community cafe science programme of anywhere in the UK which is underpinned by an effort to experiment with the concept in terms of themes and formats.”

Café Light takes place over lunchtime once a month until December at the Museum of Scottish Lighthouses. Talks are free to attend and begin at 12.30pm

Visitors to the event will also receive discounted admission to the Museum of Scottish Lighthouses on the day.

Café Controversialtakes place once a month at Satrosphere Science Centre, and is free to attend with talks beginning at 7pm.

For the full programme of Café Light and Café Controversial events visit http://www.cafescienceaberdeen.co.uk/