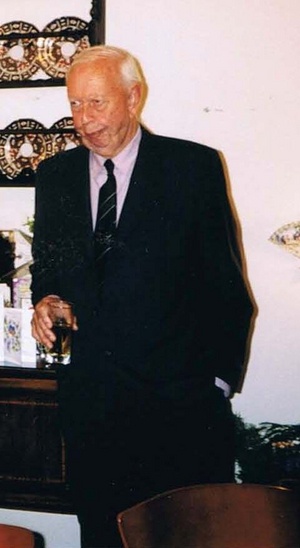 Two University of Aberdeen alumni have recognised their lifelong affiliation with the institution by leaving significant bequests towards its new library.

The generous donations will go towards the construction of the £57million flagship building which will open in September 2011.

The state-of-the-art facility will provide a 21st century learning and research environment for students, staff and visitors and ensure the University’s precious collections of historic books, manuscripts and archives are conserved and displayed for the enjoyment of future generations.

Dr Harold Watt’s gift to the University acknowledges his lifelong affinity with the institution and will be recognised through the naming of a dedicated study area in the new library.

The Watt family’s affiliation with the University goes back generations – his father, uncle, brothers, cousins and daughter also studied at Aberdeen.

After graduating in classics in 1942 and serving in the RAF, Dr Watt undertook further study at the London School of Printing before becoming joint managing director of Aberdeen University Press Ltd in 1948 – a post previously held by his father, Theodore.

He later became sole Managing Director of the organisation and also fostered a long-standing association with the University by serving as a respected member of numerous committees.

Dr Watt’s wife Muriel said: “My husband had the good fortune to be a University of Aberdeen graduate, and was lucky to both live and work in the city, on the doorstep of his old University.

The donation from the estate of Hunter Caldwell, a long-standing supporter of the University, will also support a dedicated study area in the new library, to be named in his honour.

Born in Dalmuir on the west coast of Scotland, Hunter Caldwell was educated at Aberdeen Grammar School and graduated in classics from the University in 1945.

He emigrated to Singapore in 1952 - where he remained for the rest of his life – and became a junior executive with The Straits Trading Company Group which had interests in tin smelting, mining and plantations and later in property.

He became General Manager of the group in 1967 and in 1982 went on to become Managing Director of the sister company, Malaysia Smelting Corporation, until he retired in 1994.

David Allen, Mr Caldwell’s nephew, said: “My uncle hugely valued the education he received at the University of Aberdeen and felt privileged to have had that opportunity. He wanted to put something back in the system so that others could be afforded a similar advantage.

“His father was a minister and like his brother and two sisters, my uncle had a strong Christian ethic and sense of duty in his approach to life. This was shown by the many gifts he made to the University and many other causes throughout his life.”

Welcoming this support towards the new library Professor Christopher Gane, Vice Principal for Culture and Communities, said: "The donations from Dr Harold Watt and Hunter Caldwell will provide a significant boost for our ambitious plans for the new library, enabling us to create a wonderful environment in which students, staff and the wider community can enjoy the rich collection housed in the facility.

“This magnificent building symbolises all that we hope to achieve in the sixth century of our great University. But, these aims will not be realised without the support of people who share them, people from all walks of life who feel a connection with Aberdeen and are united in the belief that we must never stop pushing the frontiers of knowledge.

“Over 3,000 individuals, companies and foundations have already made gifts towards the project, and we are extremely grateful to each and every one of them.”

The library’s vigorous fundraising campaign has now passed the £17 million mark through pledges made towards the construction project and the costs of staffing, information resources and community learning activities in the new building.

Legacy gifts are part of a long heritage of giving that has sustained the University since its formation.

A legacy gift can take the form of cash, stocks, share or property, and each and every bequest has a tremendous impact on the area of University life chosen to benefit from it.

All gifts to the new library will be acknowledged in the building and there are no limits to the way in which prospective donors might choose to be associated with the project, including the name of the building itself, particular areas within it, or the housing of specific collections.

The University is the custodian of extensive collections of historic books, manuscripts, maps and other items.

A major purpose of the new £57 million library is to provide ideal conditions to showcase these priceless items, and make them more accessible to students, researchers, and to the wider public through exhibitions, readings and other public events.

For further information about leaving a legacy for the University of Aberdeen visit: