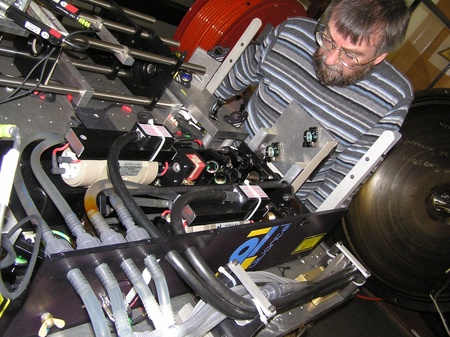 The 50th anniversary of the laser will be celebrated at an event in Aberdeen this evening.

Professor John Watson from the University of Aberdeen’s School of Engineering will explore the history of the groundbreaking invention which now underpins much of our day to day lives.

From medicine and laser cutting to underwater holography and 3D TV, Professor Watson will examine the various applications of the laser and the pioneers whose work led to its development 5 decades ago.

These scientists include James Clerk Maxwell - who began his professorial career at the University of Aberdeen in 1856 – and whose revolutionary theory on the properties of light helped pave the way for the innovation of the laser.

The event is part of Techfest In September, Aberdeen’s annual festival of Science, Technology, Engineering and Mathematics (STEM).

Professor Watson said: “The first functioning laser was demonstrated on May 16, 1960 by American physicist Theodore Maiman.

“His achievement was preceded by the work of world famous scientists including James Clerk Maxwell and Albert Einstein whose research decades before into the behaviour and nature of light, laid the foundations of the ideas which culminated in the first laser.

“In my talk I will chart the history of the laser’s development, explain how it works and explore the significant ways in which it has impacted on how we live our lives over the last 50 years.

“I will discuss some of the groundbreaking research and industrial applications that have been made possible through the use of lasers including ultrafast communications, precision cutting, medical research and holography.

“There will also be the opportunity to actually see some lasers in action – I will be demonstrating several kinds of lasers and applications and how to handle them safely.”

Tickets to the event cost £5 for adults and £3.50 for children and concessions and can be purchased from Aberdeen Box Office by visiting www.boxofficeaberdeen.com/  or calling 01224 641122.