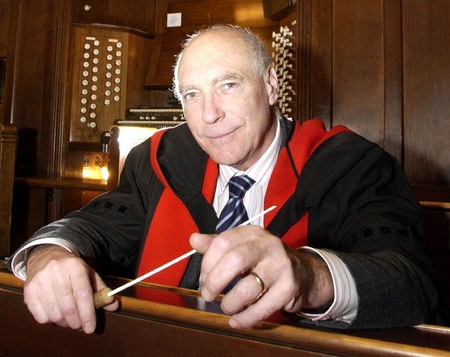 A University of Aberdeen musician will perform for Pope Benedict XVI and the institution’s Catholic chaplain will be one of the concelebrants of the mass when the Pontiff visits Glasgow.

Dr Roger Williams, who recently retired as Master of Chapel and Ceremonial Music but retains emeritus status at the University, will play two voluntaries on the organ during the giant open-air Mass in Glasgow's Bellahouston Park on Thursday September 16.

The University of Aberdeen has links to the Catholic Church going back more than 500 years to its foundation in 1495 by William Elphinstone, Bishop of Aberdeen and Chancellor of Scotland.

As one of Scotland’s three universities with a papal foundation, the institution’s Catholic chaplain, Father James Claffey, has been invited as a concelebrant of the open air mass and more than 200 members of the University’s Catholic Society will travel down to Glasgow with him.

Other representatives from the University, including the Principal and Vice-Chancellor Professor Ian Diamond, will attend a reception for the Pope at Holyrood.

The University of Aberdeen will also be represented during the papal visit to London by Shetland student Mary Rutherford.

Dr Williams, who lives near Oldmeldrum, said he was thrilled to be asked to perform for the Pontiff as part of his visit to Scotland.

He will play two pieces by Johann Sebastian Bach, Wir Glauben All’ and Fugue on the Magnificat while Pope Benedict XVI greets people at the beginning of the mass.

Dr Williams had also been busy conducting rehearsals for the Aberdeen Diocesan Choir, who will perform with the Papal Choir at Bellahouston, after taking up the post of musical director in January.

Choir members from across the north-east will join with hundreds of other singers, including five from the University of Aberdeen, to perform a new mass by Scottish composer James MacMillan.

He said: “It is a terrific honour and I am looking forward to it very much. Obviously there is always anxiety that a performance should go well, particularly when it is for such an important occasion so I hope I can do the music justice.

“Bellahouston Park is a huge arena and the mass is out in the open which obviously brings extra challenges but it will be a great occasion which I am sure will live long in the memory.”

“It is a great reflection of the strength of music at the University of Aberdeen that we have been asked to contribute in this way.”

Dr Williams is currently dividing his rehearsal time between the choir and his own organ practice.

He added: “We received the music for James MacMillan’s mass in May and we have been working on it intensively since August.

“It is a new mass which brings with it certain challenges, particularly as it is conceived as a mass in which everyone joins in so we need to make sure we know our parts really well.

“However it is a great piece and we are thrilled to be involved and representing Aberdeen city and shire, and the wider area, for the papal visit.”

Father Claffey said it was an exciting time for the University and its Catholic Chaplaincy.

“We are unique in the UK and Ireland in having a regular Sunday mass in a sixteenth-century university chapel, and that has been a great success, with a regular congregation of around 120 students,” he added.

“The Pope’s visit to Scotland is going to be a fantastic experience for us all and given the Pope’s own academic background, universities are going to play an important role in his time here.”