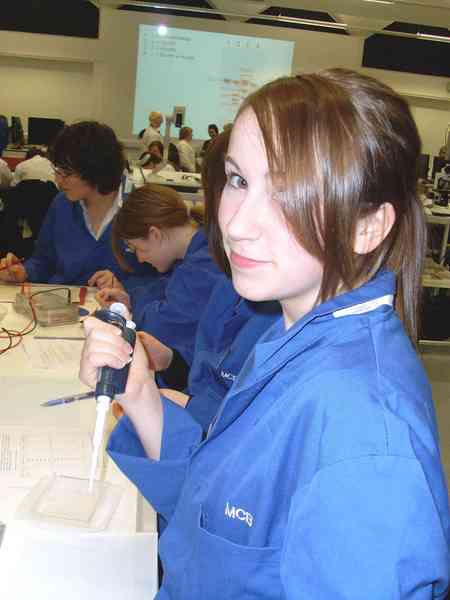 Pupils from across Aberdeen city and shire, Moray and the Highlands are getting hands-on with science in the University of Aberdeen’s hi-tech laboratories.

More than 250 Advanced Higher Biology students will take part in three days of workshops and lectures designed to give them a taste of life as a scientist, and student, within a university environment.

The sessions, hosted by the College of Life Sciences and Medicine, began today (Tuesday) and will run until Thursday. They will see pupils get to grips with the genome of a virus using restriction enzymes, which act like 'molecular scissors' to cut up the genome to produce lots of different sized DNA pieces.

They will then separate the different pieces using a technique called gel electrophoresis and look at the basic techniques that scientists use for DNA cloning.

In addition to the hands-on work, pupils will take part in interactive lectures using Personal Response Systems, similar to those used to ‘ask the audience’ on the TV show Who want to be a millionaire?

Dr Andy Schofield, Senior Lecturer and academic coordinator for the promotion of science at the University of Aberdeen, said: “The Advanced Higher Biology practical days give pupils experience of working in our University teaching laboratories and the opportunity to do some hands-on molecular practical work - something they don't often get the opportunity to do in schools.

“They also experience an undergraduate lecture, enhance their investigative, analytical and practical skills, and interact with researchers.

“We hope the practical days will inspire pupils to think about studying medical science-based subjects at University and provide them with an enjoyable learning experience which demonstrates that science is fun.”